The Solar System (sometimes stylized as "Sol System") consists of a star (the Sun), and the planets, moons, asteroids, comets, meteors and other objects gravitationally bound to it. Under the current International Astronomical Union definitions, there are four terrestrial or rocky planets, and four gas giants, as well a shedload of dwarf planets. The terrestrial planets are nearer to the Sun. As the Sun comprises 99.86% of the Solar System's mass, you might describe it as one yellow dwarf star and assorted debris.

In order of distance from the Sun the planets are: 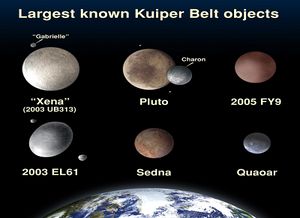 Pluto used to be considered a planet, but will always be a planet in our hearts but is now classified as a "dwarf planet" together with the former "minor planet" (asteroid) Ceres, the discord-producing Eris and some other objects in the Kuiper Belt. The rebranding of Pluto as a dwarf planet in 2006 was a minor pop science and media storm, with many traditionalists demanding that Pluto be kept as a planet. However, the reasoning behind the classification was the rate of discovery of new objects in the outer solar system. Each new object could have been classed as a planet, but undoubtedly this could lead to a considerable definition problem (prior to 2006, "planet" wasn't formally defined; there was no pressing need to until this point) with the minimum size of a "planet" shrinking until half the asteroids in the Solar System were included. At least one object, Eris, is known to be more massive than Pluto, and Ceres already had its planetary status revoked decades previously. "Plutoid" is a sub-category of distant dwarf planets to at least acknowledge Pluto as the first one discovered.

List of dwarf planets and dwarf planet candidates in order of increasing distance to the Sun, as of October 2011:

The Solar System is also home to hundreds of thousands of asteroids, concentrated mostly in a belt between Mars and Jupiter, as well as innumerable icy bodies in the outer reaches of the system, which become comets when they are perturbed into the inner system and made visible by evaporation of part of their bodies by the heat of the sun. Contrary to popular depictions, you can probably easily navigate through this with your eyes closed.

The Kuiper belt is a "disk" extending to around 50 AU from the Sun that contains thousands of small, icy planetoids, including Pluto. The Kuiper belt is believed to be the source of short-period comets.[2] According to Freeman Dyson, within a few centuries, humanity will have likely relocated there, at which time, we can expect Freeman Dyson to have learned how to use commas, correctly.

Former members of the Kuiper belt that were thrown into eccentric and heavily inclined orbits when they passed too close to Neptune in the distant past.

Trans-Neptunian objects with highly eccentric and inclined orbits whose perihelia are too distant for Neptune to influence them, making them seem "detached" from the rest of the solar system. Examination of the orbits of several Detached Objects led to a testable, but as yet unproven, hypotheses of an undetected planet. 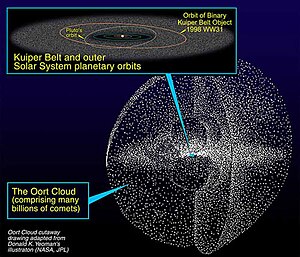 Relative postion of the Oort cloud and the Kuiper belt (the insert) to the rest of the Solar System.

Surrounding the solar system is an immense cloud of ice bodies called the Oort cloud. It lies roughly 50,000 AU from the sun or about a quarter of the way to Proxima Centauri, the nearest star to our system.[3] Its vast distance means that it is only loosely bound to the solar system and that it is easily disturbed by other stars. Such disturbances are believed to be the source of all long-period comets.

A disc-shaped cloud of comets occupies some of the space between the Oort cloud and the Kuiper belt. This inner cloud is called the Hills Cloud.

The Solar System was formed around 4.6 billion years ago from the collapse of a gas cloud,[notes 1] that as it contracted spun faster leaving a disk surrounding a dense central core. The latter would become the Sun once it had contracted enough to ignite hydrogen fusion and the former, the protoplanetary disk, was the place were planets would form. Planetary formation is thought to have taken place via accretion, with dust grains merging to form larger clumps, that would collide and fuse to form even larger clumps and so on. While in the inner Solar System temperatures were so high that just high-melting points elements and compounds remained, the four terrestrial planets forming from them, in the outer one low-melting ones (considerably more abundant than the former) were also present explaining why the four outer planets are more massive than the innermost ones.[notes 2] Planetary interactions with the remaining matter of the mentioned disk are thought to have changed the orbits of the planets, on a quite lively way for Jupiter,[notes 3] until they settled into their current ones. Those planetary dances stirred the remaining non-coalesced bodies (read: asteroids, comets, and similar debris) causing them to wreak havoc on the brand-new planets in the form of collisions. Once the supply of them was almost exhausted calm arrived to the Solar System, with just the occasional comet/asteroid impact here and there.

The future of the Solar System is tightly tied to that of the Sun. Things are not expected to change very much for the former as a whole the next billions of years.[notes 4] Once the Sun exhausts its central hydrogen 5 billion years from now things will become live again, most notably when it goes full red giant-mode 2.5 billion years later and before absorbing them roasts to Hell and back Mercury, Venus, and Earth. After burning helium on its core for a 100 million years and 20 million years of (a sort of) red giant again, the Sun will expel its outer layers as a planetary nebula leaving behind its cooling core, that will fade away as a black dwarf after many billions of years. The remaining planets are expected to orbit further away than now because of the Sun's heavy mass loss during its final stages,[notes 5] and finally it's expected that the gravity of passing stars will strip the dead Sun of them leaving it with no planets in around 1015 years, even if other research gives a much earlier time for the disappearance of the Solar System (roughly 100 billion years[4]).