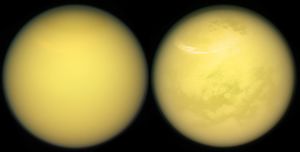 Two views of Titan by the Cassini spacecraft. Note the polar seas, clouds, and the equatorial dunefields on the right image.

Titan is the largest moon of Saturn and the second largest natural satellite of the Solar System after Jupiter's moon Ganymede, with a diameter of 5,150 kilometers. Despite this, it's too faint to be seen with the naked eye, and binoculars or a small telescope are needed to observe it.

Titan was discovered in 1655 by the Dutch astronomer Christiaan Huygens, who simply named it Saturni Luna (Latin for "Saturn's moon"). It was not until 1847 that the British astronomer John Herschel baptized it as "Titan", brothers and sisters of Cronus (Saturn for the Romans) in the Greek mythology.

For many years, very little of Titan was known besides its orbit around Saturn. Things began to change in 1907 when the Spanish astronomer Josep Comas i Solà observed how Titan's limb was darker than its center ("limb darkening"), evidence of the presence of an atmosphere surrounding it. However it was not until 1944 that it was confirmed it had an atmosphere composed of methane by the American astronomer Gerard P. Kuiper, making it the only moon of the Solar System with a (dense) atmosphere. Again, years would pass before it was possible to learn more about that distant moon — and this time in situ, with spacecraft.

While the first spacecraft to study Titan was Pioneer 11, Voyager 1 and Voyager 2 were able to obtain much more scientific data as well as better images of it. Sadly, these probes found that Titan's surface is hidden from view by an orange haze of organic compounds and while they returned a wealth of information they also opened many new mysteries. A new mission was needed to unlock the mysteries of Saturn's largest moon, and that mission — Cassini-Huygens, a joint project of NASA, the ESA, and the Italian Space Agency — after being launched in 1997 and a seven-year journey and several fly-bys of Venus, Earth, and Jupiter, finally arrived at the Saturnian system with that purpose. Most of what we know today about Titan comes courtesy of the Cassini probe, that danced around Saturn from 2004 to 2017 and which included a lander — Huygens — that landed on Titan in 2005.

Future mission proposals include most notably the Dragonfly

that after having been greenlighted would be launched around 2025.

Titan is a cold and dark world with a surface temperature of -180°C and whose dense atmosphere, which gives it an atmospheric pressure almost 1.5 times the density of Earth's, almost entirely composed of nitrogen with a small number of organic compounds, primarily methane, causes its surface to receive around 1/1,000th or even less of the Sun's light that Earth receives (surface light levels at day have been compared to those on our planet during twilight[1]). It's so cold (even Finland is hot in comparison) that water is granite-solid ice and liquid methane replaces Earth's rock and water, with a methane cycle that is analogous to Earth's water cycle.

Because of its large amount of organic compounds (it has a whole lot more than Earth[2]), Titan has been compared to a frozen analog of our planet and this analogy goes even farther when one considers that the interplay between methane, its dense atmosphere, and ice has produced equivalents of Earth's surface features as hydrocarbon lakes, some sea-sized and quite deep, — in the poles — complete with rivers and canyons, large dunefields of organic compounds covering its equator, and hydrocarbon snow covering icy mountains (with names taken from Tolkien's The Lord of the Rings, no less[3]). Surface craters caused by the impacts of asteroids and comets, so abundant in other Solar System bodies, are relatively rare on Titan, suggesting that geological activity and/or weather erodes or covers them. Nonetheless there are a few surface features that are indicative of cryovolcanism (as at those gelid temperatures liquid water mixed with ammonia and some methane would replace molten rock.)

Being so abundant in organic compounds, Titan has been a prime target for searches for extraterrestrial life, and continues being so. However conditions on this moon are adverse to the development of life as we know it, as at the temperatures present on that moon chemical reactions needed for it take place at a very slow rate and there's no liquid water at the surface, at least permanently. However astronomers have attempted to circumvent those issues by suggesting that after the impact of a meteor a patch of liquid water could exist for some time, allowing abiogenesis to happen. Another possibility comes from the existence of a mantle of liquid water mixed with ammonia under Titan's crust, which, while admittedly very salty, could support simple life.

Another more speculative theory is to set water aside and use instead hydrocarbons such as methane or ethane, liquid in Titan's conditions, as its equivalent. While there is research that suggests liquid methane-based life could be possible[4] and even some observations of distribution of hydrogen and acetylene on Titan's atmosphere seem to be caused by that kind of biochemistry, there's actually very little—if any—evidence that supports the existence of life on Titan, be it water- or hydrocarbon-based.

It has finally been suggested that once the Sun goes red giant, Titan's ices could melt and this moon be more supportive of the development of life for a few hundred million years.[5]

Of course, as everything related to space exploration, Titan has received its share of woo with examples including the identification of "alien bases" on pictures by the method of overblowing images until you pretty much see whatever you want on the individual pixels,[6] and ignoring scale issues and the like.

— The Titan article on Wikipedia, (deeper information, more references, and many cool pictures.)

Wikipedia article about the possibility of life on Titan, also with more references.