Tycho Brahe with plenty of bling-bling but not on his schnoz.

Tycho Brahe was a 16th century Danish astronomer remembered for the high quality of his astronomical instruments and observations. Brahe is also remembered for reviving the ultimately incorrect Geoheliocentric

concept of the Solar System.

At this point in time, astronomical predictions were based on solar system models that were matched to tables of data. Due to the considerable difficulty and length of time it took to get a good set of tables, centuries would often pass between the compilation of new tables. The tables in use from the 13th century and onward, the Alphonsine Tables

, had become less and less accurate over time due to copyist errors, and the Prutenic Tables

based on the Copernican system failed to improve on them, as they were based on the same corrupted data. Brahe collected new data through his observations at Uraniborg Observatory on Hven, and his observations of planetary motion were of exceptionally high quality for the time. This decisively helped Kepler develop his laws of planetary motion and demonstrated to Kepler that Mars moves in an ellipse. Though he never intended it, Brahe helped develop heliocentrism.

He understood the need to check and calibrate instruments regularly, and published observations demonstrating that a comet was above the moon. He observed that a supernova had no parallax, and therefore was in the heavens. This showed that the heavens are not immutable as previous astronomers from Aristotle onwards had generally believed.[1][2] Tycho Brahe's observations had far more lasting impact than his theoretical work; it was the publication by Kepler of the Rudolphine Tables

, based on Brahe's data and calculated using Kepler's heliocentric model, that established the said model as the Astronomical standard, displacing the Geoheliocentric model described below. 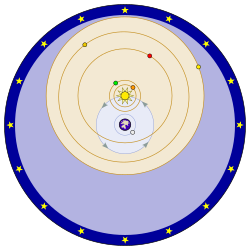 The Tychonian system of planetary motion

Tycho Brahe developed his own version of geocentrism, a geoheliocentric model now named after him. According to Tycho the Earth is motionless while the moon and sun move around the Earth. The other planets orbited the sun rather than the earth; this is a modification of the Capellan system developed by Martianus Capella in late Antiquity, in which only Mercury and Venus orbit the Sun. The Tychonic System addressed some of the mathematical flaws with the heliocentric universe Copernicus put forward and became the consensus model for early 17th century Astronomers after Galileo's discovery of the phases of Venus provided direct empirical evidence against the Ptolemaic system (the Copernican system was generally rejected at this point, as it had failed both to answer the ancient objections and hadn't provided better predictions than the now known incorrect Ptolemaic system). Most modern geocentrists subscribe to the Tychonian system, as contrasted to the Ptolemaic system, where everything orbits the Earth despite plenty of more recent evidence against geocentrism. The Tychonian system and a fixed Earth cannot be reconciled with Einstein's relativity because among other reasons all parts of the universe outside the Solar System would have to rotate daily round the Earth much faster than light, and modern observations make it no longer tenable to claim that the stars are just beyond the orbit of Saturn, as was believed in the Early Modern period and before.