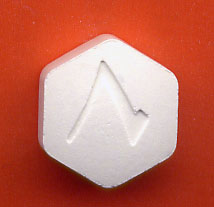 RU-486, or Mifepristone, is a drug administered in the first 70 days of a pregnancy to induce abortion. Because it is a drug, because it does not require sedation and the "horror show" that the Right to Life groups suggest abortion clinics are, and because it can be taken without anyone knowing, many people in the "anti-abortion" movements around the US and Europe feared that this drug would make abortion easy, and *gasp* then everyone would want one of their own.

After France proved the drug was successful in inducing abortions both consistently and safely, and so approved it for distribution, German anti-abortion groups pressured the German company to cease distribution of the drug. Roussel-Uclaf blocked the sale of RU-486 until the French minister of health ordered that it be provided, saying, [from the moment government approval for the drug was granted] "RU-486 has become the moral property of women, not just the property of the pharmaceutical industry."[1]

Due to fears for the safety of employees as well as safety associated with the drug manufacturing plant and the risk of intentional tampering with the drug coming from the plant, the US Food and Drug Administration did not provide the name of the manufacturer given a license to make RU-486. The "pro-life" groups posed such a threat that even today the plant does not list the city much less the address of its production line.[2]