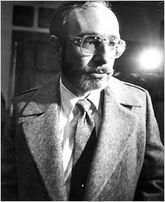 "He felt he had no choice but to expose himself to those risks because others were not willing to provide choice to women."[4]

He had received many death threats, and he and his family had been subjected to severe harassment. Like Doctors Tiller and Hern, he understood the risks to women's health and their well-being if people were willing to speak theoretically about women's rights but not get personally involved, so he continued to put himself at risk providing for their care.

The majority of Dr. Slepian's patients were lower income women. Many of his non-abortion patients were Medicaid patients who he treated throughout their pregnancy, even though he barely recouped the cost of their treatment.

On October 23, 1998 James Kopp, an anti-abortion domestic terrorist, waited in the woods just outside of Dr. Slepian's home. Like George Tiller, Dr. Slepian was a religious man and had just returned from Synagogue where he mourned for his father who had died one year prior. Also like Dr. Tiller, Dr. Slepian was shot in front of his wife. Earlier that day, Mrs. Slepian had warned the police of a specific threat she had received about her husband. The police chose not to act.

The anti-abortion group Army of God maintains a site dedicated to Kopp,[5] - a true hero for them.

After his murder, newspaper reports were filled with testimonials of how he helped women have babies even when they could barely afford good care, as well as those who did not want, or could not continue a pregnancy.