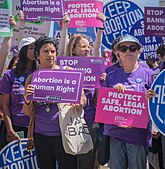 Pro-choice activists at a rally in 2019

Pro-choice is a positive loaded label given to the political stance that is in favour of letting pregnant people choose an abortion to terminate an unwanted pregnancy. It is considered a liberal view, therefore, evil and murderous by those who oppose it, but a sensible and protected freedom by those who don't.

Sometimes it's also used for the political stance that is supportive of a person's right to choose whether or not to end their life through euthanasia.[1] While some pro-choice activism is based on the principle of self-determination, bodily integrity, and physical autonomy, others have a smaller scope by targeting factors such as incest, rape, or serious fetal defects.[2]

Pro-choice could be considered by some as the antonym to Pro-life, although this is not strictly true by any stretch of the meaning ("pro-death" perhaps?). However, like the term "pro-life", it's an emotionally loaded term, essentially designed to vilify the opponent, saying that people who are against abortion are therefore anti-choice or against a freedom to choose. In fact, the "anti-choice" label is applied to those that oppose abortion.

Being pro-choice is the moderate position between forced birth (Ireland) and forced abortion (China). It's in that little word "choice" where pro-choice advocates spend their efforts

Pro-choice people believe that fetuses do not have the right to use someone's body without that person's consent. Thus, if someone doesn't want to endure a pregnancy, they should be allowed to abort instead of forced to continue.

Pro-choice people believe in keeping abortion accessible for people who need it. Thus, they oppose laws that put unnecessary restrictions on people's ability to get an abortion.[3]

The choice must exist for people to have a pregnancy terminated in a professional, legal and above all safe[note 1] manner.

While the term "pro-choice" technically refers to a stance on abortion, pro-choice advocates typically also take the stance that this choice should be an informed one.

In general, pro-choice advocates tend to favor accurate information, quality advice, and legal options in order to let pregnant people make the right choice for themselves. They also tend to think that options for acting before the pregnancy (ie., effective birth control) is the best option for adults everywhere. Sex education and access to birth control, by reducing unwanted pregnancies in the first place, reduces the number of abortions.[4][5][6]

Despite this, the anti-abortion crowd generally also happen to be against these two things. Along with the moral that people have a right to life, they believe sex education and birth control can drive up sex rates based on the flawed logic that risk cushions encourage only more risk; thus it goes against their moral views. Limiting sex education and birth control (particularly Planned Parenthood, a popular option for both as well as family planning counseling and a multitude of other services that should help lower pregnancies overall), however, turns out to be counterproductive. Abstinence-only education is associated with more teen pregnancy.[7]

There is a small amount of controversy as to whether there is pro-choice violence committed to the same extent that fringe pro-life/anti-abortion proponents stoop to, i.e., murdering doctors and firebombing clinics. The anti-abortion claim is obviously that pro-choice by definition is "violent", involving the termination of a pregnancy, however, the definition is somewhat hazy. One side is committing violent, illegal acts against autonomous humans while the other side is committing legal medical procedures to separate a human from a fetus. Currently, while like every social movement some people get carried away, there is no evidence that pro-choice campaigners are engaging in such activities.[10][11]

While the movement overall is well-intended, some pro-choice advocates do make hurtful mistakes.

Referring to a fetus as just a "clump of cells" can be hurtful to people who lost wanted pregnancies. A miscarriage or stillbirth can be a truly terrible experience for someone who dreamed of becoming a parent. To that potential parent, it's more than a clump of cells; it's their future beautiful baby.[12] Using the scientific term "fetus" can help avoid dismissing the heartbreak of grieving would-be parents.

Referring to all pregnant people as "women" isn't inclusive of trans men and nonbinary people, since some of them are capable of pregnancy.[13][14] (And some pregnant people are only girls.)

Claiming that fetuses with "defects" are a special case can be hurtful to disabled people. It's important to distinguish between fetuses with fatal defects and viable fetuses with disabilities.[15] Aborting a fetus that would become a disabled child isn't necessarily "compassionate."[16] Disabled people's lives have meaning just like everyone else's.