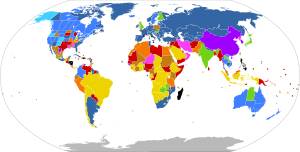 It is critical to understand that the abortion argument dances between two competing interests: the mother and the fetus. Focusing on the mother engenders arguments about her inherent right to decide who has the right to access her body and use it, when and under what circumstances she will bring a child into the world, and her basic right to control her body. Arguments of incest and rape, financial status, or the snarl word "convenience" are at issue when you focus on the mother. When your argument focuses on the baby, a host of different conversations come up. When does life begin? How far along in pregnancy can a child feel, or become aware? At what point does the fetus become a person? What is the difference (if at all) between an abortion and euthanasia if the child has serious medical problems?

Beyond that, specific arguments have played out in political and moral dialog and in the courts regarding the overall acceptability of abortion.

In most arguments discussing a woman's legal access to abortion, especially in the United States and Australia, the woman's personal responsibility in the pregnancy is at issue. If the woman has been raped or if she is the victim of incest, the audience-at-large is more likely to see her as a victim and take the situation more seriously than if she was just out on a Friday night, doing her thing. In almost all situations where access to abortion is limited by law, consideration for exemption is given in cases of rape and incest. The underlying assumption is generally two fold. One, a rape or case of incest (which in a technical sense are almost always rape) is psychologically and often physically traumatic to the woman or child the reality that a pregnancy will simply compound that trauma should be considered. The second issue falls back to stereotypes and ideals of the roles of women in society. In these cases the woman (or girl) has not "chosen" to have sex, therefore she is more pure, clean, and honorable than the woman who has sinned, and should "take responsibility" for her actions. Pro-Choice arguments counter the first claim by saying all unwanted pregnancies are inherently emotionally traumatic, and only an individual woman, in her specific place in life, can "rate" the level of trauma - not a legislature. The second claim they more or less roll their eyes at.

For right to life folks, there is a problem with the logic of the "rape and incest exception" - a problem they rarely bring up, as it makes them look cold and heartless. If a life has value from conception, and if God is in control, then that life is just as valuable if it came from a one night stand as if it came as the result of an act of violence. However, despite this clear inconstancy of their argument, few "anti-abortion" politicians or legislative bodies in the western world have suggested restricting access to abortion for the victims of these crimes.

There's a more serious question with regards to the hypothetical rape exemption. How would it actually be implemented? Would the woman have to prove she was raped before she would be allowed to get an abortion, or would she just have to make a claim that she was? In the former case, ignoring how often rapes will lead to a conviction, and ignoring that rape victims may have reasons they don't wish to pursue charges, proving a crime in a court of law can take months if not years, which is a problem for abortions for obvious reasons. In the latter case, if a woman who wants an abortion must claim rape, well, we might be creating a world where innocent people are being falsely accused of rape, while actual rapists could have the "it was consensual but she wanted an abortion" defense.

As for incest, not all cases are instances of rape, even if absolutely every instance is gross. The big issue is the risk of genetic abnormalities and birth defects. However, defects from incestuous relationships are not guaranteed, just far more likely. If the mere risk of defects from incest allows for abortion, then logically, abortion should be allowed in all cases where there's higher or even guaranteed chances of genetic defects. For instance, if genetic screening shows Down Syndrome. Of course, this is also making a value judgement of a human life based on disability, and where it should stop becomes blurry.

The 'rape/incest exemption' is more of platitude than a well thought out argument, and the anti-abortion side probably isn't giving too much thought into how to ensure victims of rape or incest actually have access to abortions.

The second major framing issue, when discussing the morality, ethics, or legality of abortion, is how far along the pregnancy is. Regardless of where they stand on the issue, or what they think of the legality of abortion, virtually everyone discussing this issue intuitively understands and agrees that an abortion that happens in the first month of the pregnancy is quite different from an abortion that happens in the 9th month. For ease of discussion, most people discussing the issue of abortion follow the medical "trimester" system, and see 5 distinct "term based" limits.

There is another framing regarding "term of pregnancy" that is a bit of a slippery slope due to technological and medical advances: "ability to survive outside of the womb", or "viability". In 1970s, at the time of the Roe v. Wade decision, this happily coincided with the beginning of the 3rd trimester. But as technology advances, that line is younger and younger. It is highly feasible that in the not too distant future, fertilized eggs themselves can be incubated - making the question of "can survive out of the womb" tricky.[note 2]

In general, proponents of legalised abortion and its safe regulation hold that only a woman herself, rather than the state or other group, has the right to assert control over what happens inside her body.[1]

The single most critical argument for ensuring that women can find access to legal safe abortion is that women will attempt to abort, legal or not, safe or not. When a woman truly does not want a pregnancy, especially if that pregnancy is potentially problematic to her social or physical situation, and feels for herself, that there are no alternatives, she will try to end it even to the risk of her own life.[2] No amount of moral preaching, ethical discussions, or legal wrangling will change that reality.

With such a reality, it is incumbent on health institutions and governments to insure that she has the same access to health care that she would if she wished to bring the pregnancy to term.

Additionally, even if a woman wants to be pregnant, about 1-2% of pregnancies are ectopic—a dangerous condition which can result in death of the mother and for which the only treatment is abortion.[3]

The argument for a woman's right to abortion according to the United States Supreme Court is based on a woman's right to privacy in making medical choices about her body and her reproduction. While articulated differently in Roe v. Wade, the basic premise that most legislative and judicial bodies in the Western World have used is that a woman maintains integrity of her body and of her medical decisions whether those decisions are about reproduction related issues including abortion, or physical issues like plastic surgery, or the right to seek medical attention at all, regardless of what might be "best for her" per the medical establishment or her social community.

In the United States, the breakdown for a legal medical right to abortion rests on these arguments:

Many opponents of abortion base their position on religious doctrine;[4][5] however, it is possible to oppose the practice on purely humanistic grounds.[6][7][8][9][10][11]

Argument for the right to evict[edit]

Walter Block, an economist and libertarian, proposed a position known as "evictionism". This position relies on separating abortion into two parts; the act of removing (evicting) a fetus from the womb, and the act of killing it. Evictionism as a position states that people are allowed to evict from their property, and this is an unalienable right - in line with most libertarian thought.

As a woman owns her body and her womb, Block's position states that a fetus therein that is no longer wanted is arguably a parasite and intruder. The woman therefore has a right to evict the fetus using what means are necessary while causing minimal harm.

A similar distinction is drawn by Judith Jarvis Thompson, who argues that although abortion can be permissible, it must be distinguished from "the right to secure the death of the unborn child".[13] If the fetus were to miraculously survive the abortion, Thompson argues that the mother would not then have the right to kill it, although the death of the fetus in the course of an abortion would not make the abortion morally impermissible in itself.

Arguments against abortion generally focus on appeals to emotion the right to life, guided by the underlying conviction that life is intrinsically valuable, though pro-life arguments can descend from more practical considerations as well.

Arguments against a fundamental right of choice[edit]

Arguments against a choice to abort typically rest on one or more of the following premises:

The equilibration of rights[edit]

Whether we should override the mother's right to choose or the fetus's alleged rights is a contentious issue and pro-life advocates generally place the fetus's rights above the mothers in all but the most extreme cases.

Pro-choice advocates often cite risk of maternal death or pregnancy by rape as justifications for abortion.[citation needed] However, the pregnancy-related mortality ratio was 17.8 deaths per 100,000 live births in the US in 2011 (most recent year for which CDC data is available).[14] The same 2005 study found that only 12% of women cited a "physical problem with health" as a reason for abortion and only 13% cited "possible problems affecting the health of [the] fetus", indicating that abortions are generally performed for reasons other than concern for maternal or fetal health. Finally, abortion due to rape is claimed to abort the fetus for the actions of the rapist.[15]

The argument from potentiality asserts that we ought to respect the rights of the unborn, specifically the right to life, even if they are not yet persons.

The probability that we terminate the life of a fetus who would otherwise be born alive is a morally relevant consideration.[16] This becomes particularly vexing as medical technology advances, driving the age of viability (and of the possible transition from fetus to baby) earlier and earlier. 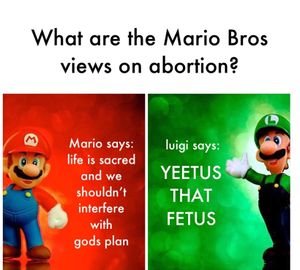 Not even the Mario Bros. agree on it.