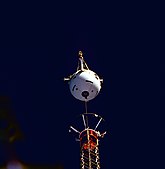 The Tethered Satellite System being deployed.

The STS-75 incident is an alleged UFO sighting where the bright spots seen moving in video coverage of a Space Shuttle mission are interpreted as a swarm of alien spacecraft UFOs around the orbiter. It has no "official" name and it's usually described with some combination of "Shuttle," "STS-75," "Tether," "UFO," and "incident."

STS-75 (the 75th mission of NASA's Space Shuttle) was launched in February 1996. One of its objectives was the deployment of the Tethered Satellite System Reflight (TSS-1R) experiment. Research in electrodynamic space tethers is interesting to scientists because of the potential for cheap propulsion and power generation in Earth orbit, something useful for satellites and space stations. [1]

The tether allowed STS-75 to dangle a satellite from a 20 kilometer (12 mile) cable and check how much current the Earth's magnetic field would induce in the cable. But the tether broke before it was completely deployed and, together with the satellite, drifted away from the orbiter.

Basically, because of unforseen pinholes in the insulated cover of the tether, air trapped under the insulation bubbled out of the pinholes into the vacuum of space. The approximately 3500 to 5000 volts being generated across the tether converted the air bubbles into a plasma (which is a great conductor of electricity) that short circuited to the metal body of the shuttle, and -- pop! -- the current was enough to melt the cable.[2]

As seen on video[edit]

NASA mission video recordings of the tether experiment show what appear to be a number of bright objects swirling around the tether. Astronaut Franklin Chang-Diaz explained the bright spots seen near the tether were "a little bit of debris that kind of flies with us" that was illuminated by the sun.[3]

Since the shuttle and all its contents were weightless and orbiting the Earth at 17,600 miles per hour, anything that gets detached from it (like ice crystals) would tend to hang around nearby and "fly with" the shuttle.

A routine water dump[Note 1] had taken place just before the tether experiment. Shuttle water dumps are known to create clouds of debris particles, many of which linger around the shuttle for several hours before drifting off. And the camera's image intensifier circuit is known to distort bright objects, creating circular image artifacts that appear "notched" - reflecting the notched shape of the camera's aperture.[4] 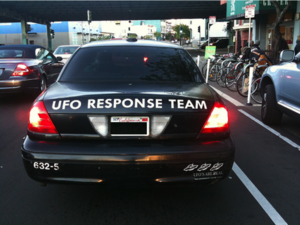 "Quick! To the internet!"

Some UFOlogists were not satisfied with such a boring explanation. So they examined the video looking for evidence that would prove the existence of aliens, quickly cooking up a counter-narrative.

They decided the bright spots had to be Buick-sized alien ships located some distance away, because the video showed the spots appearing behind the tether. Naturally, they rejected more rational explanations, e.g. the debris was overexposed by bright sunlight giving the illusion it was behind the tether. (Hey, they don't call it UFOlogy for nothing)[3]

Of course, like all cool-but-secret government stuff, NASA's supposedly covering it up because THEY don't want you to know about it.[Note 2]

Other (more creative) UFOlogists saw the bright spots as an "undiscovered" naturally existing life form, like an amoeba, only bigger. According to cranky geniuses, these flashing, blinking tribbles are pseudoscientifically magical:

According to crank thought-leaders, these space amoeba are friendly and can teach mankind how to avoid nuclear war and live in peace, if we'd only stop messing with their "food" and attempt to communicate with them. It's not the least bit surprising to us that this particular fantasy borrows shamelessly from old Star Trek episodes.