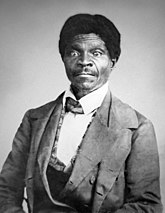 Dred Scott v. Sandford was a case brought before the United States Supreme Court in the years prior to the American Civil War. The case dealt with a man who had been a slave, and then moved with his master to a state that forbade slavery. When the master wanted to move back south, the slave (Dred Scott) protested, claiming that his residence in the free state had made him free. The Court's holding, led by the blatantly biased slave-owner Roger Taney, had three basic tenets:

There was great outcry within the North against this ruling, as it basically made it impossible to abolish slavery anywhere as well as nullifying the North's benefits from the Missouri Compromise (which was a result of already very-high tensions on negotiating the slavery problem). In its opinion, the Court held that slaves did not enjoy the "privileges and immunities" of citizenship. The Fourteenth Amendment to the Constitution sought to supersede Dred Scott by defining citizenship and the "privileges and immunities" of citizenship.

This decision was originally brought forward to settle slavery tensions in the United States during the antebellum period once and for all. We all know how that turned out.

The rather large differences between fully-actualized African American people and fetuses is covered up in this analogy (which has rather racist implications). It is also sometimes used as an example of "activist judges" giving an unjust ruling (just as Roe v Wade supposedly was an "activist" ruling that gave an "unjust" result), but the fact of the matter is that the primary injustice was the legality of slavery; any ruling that rejected slavery would have been "activist." If one believes that laws should be followed, and judges should not evaluate them according to their own consciences, then it doesn't make much sense to be bringing up slavery.