The Fourteenth Amendment to the United States Constitution is one of three post-American Civil War Reconstruction era amendments[note 1] aimed at re-integrating the South into the Union principally by legislatively overturning the Supreme Court's decision in Dred Scott v. Sandford, equalizing the rights of black and white males following the American Civil War, and normalizing the relationships between the various states.

Legal history and constructions of the Fourteenth Amendment[edit]

The Fourteenth Amendment was passed in the heat of the Reconstruction following the American Civil War, yet was only shortly debated in Congress. In fact, after the long debate on the first of the Civil Rights Acts (the Thirteenth Amendment), few were willing to debate the amendment for long. Other strange circumstances surrounded the passage of the Amendment; notably, its ratification was rescinded by a few Northern states shortly after passage, and ratification was secured only by compulsion in the Southern states. This has led to scholarly speculation about the "legality" of the Fourteenth Amendment. While the subject continues to be debated in academic circles, though, the argument's practical validity has declined sharply: it is so deeply ingrained in America's constitutional framework that to even reconsider it would require a complete rethinking of American constitutional law from the late 19th century and on. In any event, a general historical consensus advocated by legal academia is that the Amendment was passed in a "Constitutional Moment" — that is, a period of crisis when the state of affairs justified a suspension of standard procedural rules, and instead, the country legitimately took stock of its base morals in an extralegal, but moral, sense.[1]

Methods of interpreting the Constitution[edit]

Judicial and legislative interpretation of the Fourteenth Amendment varies greatly through the Amendment's history. Early on, courts interpreted it very narrowly to permit what would today be considered legal racial discrimination according to notions such as "separate but equal" doctrine. Courts presently interpret it very broadly to guarantees important fundamental privacy rights that were nonetheless not expressly identified in the Constitution. Strict constructionists, including originalists and textualists, argue that readings of the Fourteenth Amendment purporting to guarantee these unstated rights go against the framers' intent. The majority position is that the "framers' intent" was not to set its construction squarely in time in the 1860s, but rather to vary and expand with time.[note 2] 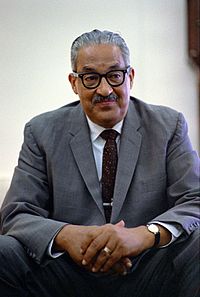 Most litigation under the Fourteenth Amendment is brought under the Due Process Clause, the Equal Protection Clause, or the Privileges and Immunities Clause.

The Privileges and Immunities Clause prohibits the various states from abridging those privileges that come with national citizenship. The Clause is largely “drained” of meaning[4] following the Slaughterhouse Cases, which placed anything other than civil rights (even political rights) in the exclusive control of the states. While this interpretation of the Clause has been largely abrogated, it is still rarely invoked, absent a brief 1999 revival.[5] However, it is read to import the restrictions imposed upon the federal government by the Bill of Rights, onto the state governments.

Unlike the Privileges and Immunities Clause, the Equal Protection Clause is thoroughly integrated into American anti-discrimination law. The Supreme Court invoked the Equal Protection Clause in the Plessy v. Ferguson, which held that the Constitution guarantees blacks and whites equal protection under the law, "separate-but-equal" facilities do not abridge the right, and in fact preserve the public interest by separating the races, to the benefit of all.[6] This nearly universally reviled interpretation of the Fourteenth Amendment was overturned 58 years later in the landmark case of Brown v. Board of Education, in which the Supreme Court abrogated the "separate but equal" doctrine as effectively permitting grossly inferior treatment of blacks. The Court held by 9-0 vote that discrimination solely on the basis of race requiring black students to be bussed to purportedly "equal" though segregated schools violated the Fourteenth Amendment. The Court's declaration of the equal rights as between black and white students came only after a vigorous legal struggle led by the NAACP, including a young Thurgood Marshall.[note 3]

Like the Equal Protection Clause, judicial and legislative interpretation of the Due Process Clause changed significantly since the Fourteenth Amendment was adopted in 1868. The Due Process Clause of the Fourteenth Amendment is in effect a carbon copy of the Due Process Clause of the Fifth Amendment, which also protects against deprivation of property without process of law. Early on, this was understood as encompassing only procedural limitations on deprivations, as in, the government cannot take property without a fair hearing, which has come to be called "procedural due process".[8] However, the justly hated case of Dred Scott v. Sandford, for all its deeply troubling racist connotations, included also the first discussion of substantive due process, which has ironically become a powerful weapon against racism.[9] This case first held that the individual held certain rights which the government could not take without due process of law, as distinct from defining what procedural types of process are adequate.[10] Early civil rights cases nonetheless largely ignored the Due Process Clause: it is treated only in passing by the Slaughterhouse Cases, and narrowed by the Civil Rights Cases, which held that the Constitution only protects an abridgement of rights undertaken by state action (subsequent cases have significantly confused the state action doctrine, to the benefit of the civil rights movement).[11]

During Melville Fuller's tenure, the Supreme Court often used the Due Process Clause to protect industry from being regulated by government, striking down laws to limit working hours or to establish a minimum wage. The most prominent case among them was Lochner v. New York. During the New Deal, the Due Process Clause was used to strike down various New Deal programs. President Roosevelt even attempted to pack the court[note 4] to implement his New Deal. Later the court abandoned this approach and generally upheld expansion of governmental power, and the New Deal programs were enacted and implemented.

The Due Process Clause quickly grew to encompass significant rights not specifically identified in the Constitution. In the 1880 case of Strauder v. West Virginia, the Supreme Court held for the first time that West Virginia's rule permitting the categorical exclusion of blacks from criminal juries violated the Due Process Clause.[12] The 20th century brought many additional liberty rights not specifically identified in the Constitution. In a companion case to Brown, the Supreme Court held that segregation was a deprivation of a substantive right without due process of the law.[13] The highly controversial 1973 landmark case of Roe v. Wade further established personal liberty rights not identified in the Constitution with the Supreme Court holding that the right to choose whether to have an abortion is a substantive right which cannot be removed without rational governmental basis. The Court held that, since the fetus was not alive at the time of Roe's abortion, there was no rational basis for governmental intervention, and the substantive right therefore trumped any government justification to intervene.[14] This expansion of substantive due process has been much criticized, especially by conservative judges such as Justice Antonin Scalia, William Rehnquist, John Roberts, and Clarence Thomas,[15] however Byron White also criticized the doctrine.[16] The Court interpreted the doctrine of substantive due process broadly in the 2003 case Lawrence v. Texas, in which it held that the right of adults to engage in consensual sodomy could not be abridged without rational basis, which did not include biblical or purportedly moral perspectives.[17] Justice Scalia sharply dissented, arguing that this expansion of substantive due process would be "the dicta that ate the rule of law". Notwithstanding Scalia's objection, the doctrine of substantive due process remains the majority position on the Supreme Court, certainly at least through the retirement of Chief Justice William Rehnquist.

Sen. Jacob Howard (R-MI), author of the Citizenship Clause. His own party hates his legacy.

In the modern era, conservatives concerned over illegal immigration have proposed modifying this clause as a means to prevent it. Pejoratively, American-born children of illegal immigrants are termed "anchor babies." In 2011, legislators in around 14 states introduced bills to evade the Citizenship Clause.[22] In every session of Congress since 2005 (the 109th, sessions last two years), Representative Nathan Deal (Republican of Georgia) has introduced bills requiring that at least one parent be a US citizen or legal resident in order for a US-born child to be a citizen by birth.[23] At the start of the 111th Congress in 2009, Senator David Vitter (Republican of Louisiana) introduced Senate Joint Resolution 6 to propose amending the constitution rather than introducing an Act of Congress to modify the Citizenship Clause in order to allay any court challenges.[24] Considering that the Amendment was originally passed almost entirely by the Republicans tells you a lot about how things have changed since it was created. Citizenship with the condition of parents being citizens is otherwise known as jus sanguinis and is practiced in European nations like Belgium, Ireland, Italy, and Sweden.

See the main article on this topic: Pseudolaw

Among the lunatic fringe of the sovereign citizen crowd, there are some who interpret the Citizenship Clause of the Fourteenth Amendment not as granting citizenship to people who wouldn't otherwise have it, but as creating a new class of citizens separate and distinct from the traditional, pre-Fourteenth-Amendment citizens of the states. They point to the fact that "Citizen" is capitalized earlier in the Constitution, but is spelled with a lowercase letter in the Fourteenth Amendment, and ignore the fact that this capitalization practice was a stylistic/linguistic feature rather than anything with legal significance. There were no consistent capitalization rules applied in the 18th century, but capitalization rules were close to current usage by the middle of the 19th century.

Proponents of this harebrained hypothesis claim that this new, "Fourteenth Amendment citizenship" actually makes you the property of the evil Federal government, which is why the government can tax you. Considering that many self-identified Sovereign Citizens are also neo-Confederates, and that the Fourteenth Amendment was mostly designed to grant citizenship to newly-freed blacks in the slaveholding States, it's no wonder that this argument appeals to them.

Text of the Fourteenth Amendment[edit]

The Fourteenth Amendment is composed of 5 sections:

Arguably the most impactful provisions of the Fourteenth Amendment are its protections against discrimination on the basis of various categories. The first important protection is the Equal Protection Clause, which prevents disparate groups from being treated differently for no adequate reason. The second is the Due Process Clause, which protects an individual's liberty rights from being stripped without cause and guaranteeing "fundamental fairness" in civil and criminal proceedings.

Discrimination or restriction of a right, whether or not fundamental, passes constitutional muster when it is for cause. Thus, the Equal Protection Clause is an instrument of judicial review according to which a court determines whether governments may discriminate among different groups for different reasons according to various levels of scrutiny based on the nature of the right:

These standards of judicial review apply to both Equal Protection and Due Process cases.