From RationalWiki
(Redirected from Shintoism)
Jump to navigation Jump to search

The Great Torii at Kehi Jingu in Tsuruga, Fukui, Japan.

Shinto (神道, Shintō) is one of the handful of indigenous religions (or spiritualities[note 1]) from Japan. It has become so ingrained in Japanese culture, rituals, art, literature, and daily life that it could be considered the single most-practiced religion in Japan, though few people in Japan self-identify as followers of Shinto.[note 2] Shinto is a nature-based religion, focusing on the importance of nature in guiding human lives, and provides background beliefs for such core Japanese cultural practices as suibokuga (brush art), bonsai, and karesansui (Zen rock-gardening).

Shinto recognizes kami (神, gods or spirits) as existing within every natural thing. Sometimes kami-saturation extends to everything, period. The rocks, the mountains, the wind, the rivers all have kami, but a swordsman or potter may also say their creations have kami within them. Though the word in one context means "gods", kami are something unique to Japan: not quite souls, but energy forces with some level of will to them, to be respected and honored. The concept of kami had a rather obvious influence on the religion of the Ainu people

, who called their gods kamuy but otherwise had very different traditions that more closely resembled those of other subarctic peoples whom they regularly traded with.

Nature[1] is always at the very core of Shinto animistic beliefs, permeating not only the art and way of daily life of the Japanese, but modern Japanese views of a "green" economy, of renewable resources and renewable energy, and of preserving habitats for endangered species; some of this, though, is a continuation of simple pragmatism after rebuilding from the 1657 Great fire of Meireki

almost completely deforested the southern three islands of Japan, since the ruling Tokugawa shoguns[2] realized they had to avert a looming environmental catastrophe and therefore clamped down on anything that could cause further degradation.[3]

Shrines that are specifically placed to honor kami traditionally have a gate (torii 鳥居) which marks the beginning of the sacred land. The gate symbol has become associated with Japan as a nation.

Shinto does not require any profession of faith, nor does it have any systematic doctrine. There are no scriptures or holy works associated with Shinto, only various myths, long-held traditions, and a general overarching understanding of how the world works and what human roles within that world should be. Most of the people who actively practice Shinto (as opposed to just going to festivals, or doing folk magic because "it's what mom did") are also Buddhists. Unlike most Western religions (Mormonism, Scientology, etc), Shinto espouses basic tenets compatible with any other belief-system.[note 3]

The majority of people who practice Shinto self-identify as "atheist".[note 4]

The Shinto creation myth is one of the more beautiful creation myths[note 5], and is also the subject of the first known Japanese book, Kojiki (712).

The Universe has always existed, but it was formless, like clouds in a light storm, churning. But soon, there were sounds[note 6] which indicated there was specific movement in the mass, of individual tiny particles. Because of the movement, light rose to the top of the Universe, and the particles rose as well, but not as high, yet escaping from a more dense matter. The light was takamagahara (高天原), where the gods would reside, the two masses became sky and water, and earth.

The early gods were not human-like, and they did not have definite shape or gender. But when the next generation of gods arose from the heavens, they had gender, and populated the earth. While the rest of the earth was made to be wild. From the kami's wills, Izanagi and Izanami, a mated pair of gods, specifically carved out Japan and made the Japanese people. 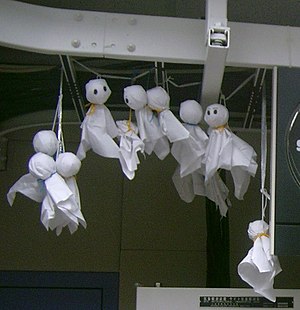 Shinto is also responsible for the famous good luck charms and wish flags found at Buddhist temples and Shinto shrines.

Want to control the weather? Make a ghost-like toy and hang it out of your window.

Want to heal a friend? Make an origami crane, or better, 1000 of them

(though the story behind this one is quite sad).

Want to purify yourself? Invite the sparrows into your home to make mud nests for the season.

The amount of belief in things like these can usually vary from household to household; however, it is incredibly uncommon for these traditions to be 'forcibly passed on' or 'spread' to other people. In fact, these beliefs are far more a cultural practice of Japan than an actual religious ideology. For example, folding origami cranes may or may not have a spiritual meaning depending on who you ask.

SCAP (Supreme Commander of Allied Powers) "is accomplishing these reforms: Elimination of militaristic State Shinto; Weeding Shinto out of schools; Guaranteeing freedom for all religions"

For most of Japan's history, Shinto was intimately tied to the Japanese government, because since the 7th and 8th centuries,[4] the emperor was believed to be a descendant of the sun goddess Amaterasu

and thus part of the divine hierarchy; the promotion of Shinto as the national religion was retroactively termed "state Shinto" in the 1970s. State Shinto was heavily promoted during the Meiji period (1868-1912), when government bureaus were established to regulate worship, and came to a head in World War II, when the state religion was used to encourage nationalism and militarism. State Shinto effectively died after the war, when Emperor Hirohito was forced to renounce his divine status.