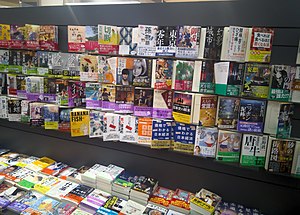 A selection of Japanese literature in a bookstore

Literature refers to written works, especially such forms as poetry, novels, novellas, plays, epistles, epic poems, graphic novels, haiku, speeches and letters. These may range from the speeches of Cicero

and Martin Luther King Jr. to the Homeric epics. Literature usually refers to the works that have had the greatest influence upon artists, culture, language and history.[3] Literature traditionally was composed by an intellectual elite in most cultures around the world; literary traditions include Sanskrit literature, Mesopotamian literature, Latin poetry, Chinese philosophy, medieval English literature, Roman literature, Japanese haiku, et cetera. All of these elite literary forms are important to history and are considered a pleasure to read by many. There have also been many authors with wide audiences who are now highly regarded such as Charles Dickens

; these authors have had a large influence on many aspects of culture. What constitutes great literature is a difficult question that cannot be attributed to any one particular criterion; the surest benchmark is continual artistic and intellectual influence.[4]

One of the most influential authors is William Shakespeare, who wrote elaborate language which surpassed his contemporaries, and he was influenced by masters of literature and philosophy that came before him such as Ovid

.[5] Shakespeare was a rare example of a writer who wrote in a popular form of its time (the play), but the content surpassed the form to the point that he was highly regarded by artists and intellectuals. Although snobby critics rejected Shakespeare in his own time, poets and playwrights such as Pope, Dryden, Milton and Johnson defended Shakespeare's works and he continues to have a lasting influence on our culture. Along with his influence and his being esteemed widely by millions of people, Shakespeare has also been commodified and institutionalised since the late nineteenth century, and there is an entire industry of actors, playwrights, scholars and fans dedicated to his work. Shakespeare influenced hundreds of great writers, philosophers, composers, filmmakers, et cetera, and he introduced thousands of words into the English language; these factors make him a figure important to literary history and therefore worthy of study. [6]

Among the Western authors there have been many great skeptics who believed reason to be more important than doctrine, and many of them dared to question established dogmas of their period. Such thinkers include Lucretius, John Milton

, Nietzsche, Bertrand Russell and many others.

Some literature is an acquired taste, like warm dark beer. Try reading Moby Dick or anything by James Joyce, which are not as difficult as certain people think; yet they demand greater intellectual concentration.

Myriad literary theories exist, but most employ some variation of the scientific method (or can be argued to do so) in the process of analysis. Some of the more common modern examples include:

The Argentinian writer Jorge Luis Borges (1899-1996) coyly suggested that all religions, in fact, derive from "fantastic tales". In 1790 the admirably crazy William Blake defined religion as "choosing forms of worship based on Poetic Tales". In North America, Walt Whitman (1819-1892) first titled Leaves of Grass as The New Bible. If you're interested in how religions work... *hint hint nudge nudge*. Though Whitman was hardly conventionally religious.

Fervent followers of one or another strand of religion may unwittingly further the idea that faith and fiction intricately intertwine. Such believers may safely advocate selected scriptural texts as sources of legal or moral guidance. But those who read and love literature more largely may also have other matters in mind.

Many influential writers of literature were known for their rebellion against authority and religion. Although Greek and Roman epic poems contained gods and mythical beasts, Lucan, the Latin poet during the Nero regime BCE 39 65, was one of the first to dispense with the gods in his long and brutal epic poem De Bello Civili. This was a notable departure from the traditional use of Greek gods governing the affairs of humanity in Roman imaginative literature. The work proved influential for figures such as Dante Alighieri (who listed Lucan as one of the major poets with Homer), Percy Shelley, John Milton and Christopher Marlowe. Marlowe, who had collaborated with Shakespeare and was arrested for both atheism and sodomy, was one of the first poets of the Renaissance to translate the first book of Lucan’s notoriously challenging Latin into English. [7]

, was a great atheist poet of the Romantic era. He wrote The Necessity of Atheism, and was booted out of Oxford for it. He influenced Karl Marx, Martin Luther King, Ghandi, Bertrand Russell, Leo Tolstoy, Oscar Wilde, Thomas Hardy, George Bernard Shaw, W. B. Yeats, Upton Sinclair and Isadora Duncan. He also influenced three or four generations of poets, including important Victorian and Pre-Raphaelite poets such as Robert Browning and Dante Gabriel Rossetti.

Joyce admired the Jews because, like the Greeks, they lived in a diaspora and because, like Odysseus, they were wanderers. Furthermore, the Jews and Greeks proved that it was possible to worship higher goals without surrendering to the especial horror of Holy Mother Church—Joyce's lifelong enemy. He unceasingly blamed the priesthood for, among other things, the betrayal and abandonment of Charles Stewart Parnell, the heroic Protestant nationalist leader who was taken in adultery. Indeed, largely because of that church, Joyce himself was forced to live in exile from Ireland most of his life, and much of Ulysses is an attempt to reconstruct, from memory, the sight and sound and feel of his beloved Dublin.[8]

A good deal of literature has a good amount of grounding in scientific and mathematical subjects. These include: