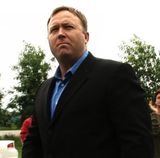 Alexander Emerick Jones (b. 1974—imminent FEMA takeover) is a nutritional supplement salesman who moonlights as a psychotic radio shock-jock and a legally certified self-proclaimed "performance artist" who specializes in making up conspiracy theories to amuse his audience. He is the world's most powerful conspiracy pusher: his shows drawing millions of views daily. Any time anything interesting happens anywhere on Earth, there's a 100% chance that Jones has found "proof" that it is either (1) a false flag operation by the New World Order (NWO) or (2) a "massive coverup operation" run by the New World Order (NWO). No exceptions. You would think the New World Order would've eliminated this widely-known bearer of all their secrets, but nope. For some reason they see fit to let him continue.

Like all good showmen, you must understand his early work to truly appreciate his art: Jones got his start in 1995 on Access TV in Austin. Jones first hit the limelight with Y2K. And he was ready: grunting about the end of money, reporting on millions of deaths worldwide, and shilling for his survivalist's shop called "The Hardware Store": guns, ammo, MREs

and 8-stage water filtration systems. And we all awoke on 01 January 2000 to… absolutely nothing. Most Texans assumed he was done. Then 9/11 swooped in and bailed the charlatan out. Then Obama became the anti-Christ of choice. Then Trump became Jones' best pal, despite Jones otherwise generally assuming that anyone associated with the government is a [insert snarl word here].

In short: Jones has been predicting the end of the world for 27 years. And it gets worse from there. Goat help us all.