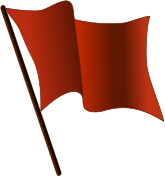 If you wave it hard enough, they'll not notice that you're actually crossing your fingers behind your back.

A false flag operation is an operation conducted by one party or government and made to appear as though it were sponsored by another party or government. The term (although not the tactic) has its origins in the traditions of "honourable" naval warfare, where ships were required to sail under their own national flag in order that they could be identified. As people learned that being a sneaky bastard was much more fun much more effective than playing by the rules, ships began sailing under "false" colours, i.e. flying their enemy's flag in order to get close to their enemy, before swapping to their true colours and opening fire.[note 1]

In the modern use of false flag tactics and operations, this final step is avoided entirely, making it difficult to identify what is really a false flag operation, and what is just some conspiracy nuts not trusting their own government.

A list of such attacks either determined or widely held to be false flag attacks follows:

Conspiracy theorists have claimed that the terrorist attacks of September 11, 2001 were a false flag operation by the United States Government, notably in the "documentary" Loose Change. Their claims are not seen as credible by most investigators. It is interesting that the concept of a false flag operation is a staple of almost all conspiracy theories — that a government would attack their own people to justify something is appropriately dramatic and evil to be attractive to anyone already predisposed to the idea that the world is secretly being controlled by dark hidden forces. Similar claims were launched within an hour after the Boston Marathon bombing of 15 April 2013, and, two days later, after the West, TX fertiliser plant explosion, citing the monkey that jumps up and down in Alex Jones' head.[7]

On 11 January 2015, in the Project Camelot Portal blog, Kerry Cassidy wrote that the Charlie Hebdo massacre was obviously a False Flag operation by the French government.[8]

In fact, since the arrival of 9/11 truthers, no tragedy goes[9] by[10] without someone claiming it was a false flag.

Paranoid wackjobs on both the left[11] and the right[12] have argued that Edward Snowden is, or likely is, a limited hangout or a false flag operation. This is especially ironic given that Snowden's NSA documents have revealed actual false flag capabilities by the Canadian government,[13] and a British "dirty tricks" program — including false flag operations — shared with the U.S., New Zealand, and Australian (and Canadian) governments.[14]

which killed 293 people, were generally blamed on Muslim terrorists, but the attacks are claimed by some to be a false-flag operation by the Russian government to get support for their war in Chechnya and Dagestan, justified as a war against Muslim terrorists.

False flag attacks have been used in apparent attempts to discredit political opponents (however, they may actually have been more a case of pathetic attention-seeking). For instance, in 2008, a woman claimed to have been attacked and mutilated (having 'B' for 'Barack' carved into her face) by a black man for being a McCain supporter. Eventually, however, she confessed that she had mutilated herself and made the whole incident up.[15][16] Not helping her story was that the B was backwards and looked like it had been made by a fingernail, not a knife.