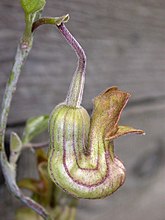 Birthwort (Birthworts, Pipevine, or Dutchman's Pipe vine) is a common name for plants in the genus Aristolochia. Birthwort is notable for its use in Western herbal medicine, traditional Chinese medicine (TCM), Ayurvedic medicine, and many indigenous herbal traditions. This is despite causing cancer and kidney failure. Home run for evidence-based medicine!

Given the long and well-documented history of medical usage (since 300 BCE) and the extreme toxicity of birthwort, it could be argued that this is one of the best cases against the "appeal to tradition" and against the related "appeal to ancient wisdom", "appeal to nature", and "argument from authority" fallacies.

Aristolochia has been used for thousands of years in various cultures worldwide as a panacea for numerous diseases. Birthwort was especially thought to be beneficial for women giving childbirth; the name aristolochia derives from the Greek "άριστο λοχεία" for "noble birth" or "excellent birth". Aristolochia was commonly used in ancient Greek, Roman, and Byzantine pharmaceutical recipes for various conditions, including kidney ailments, peritonsillar abscess, bladder stones, edemas, gout, snakebite, and uterine complaints.