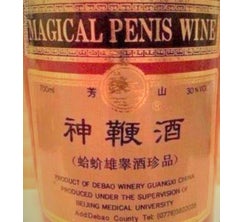 Why drink ordinary wine when you can have magical penis wine?[9]

While today, what has worked in the 'fields' of herbalism has been added to pharmacology and what hasn't worked has been discarded, prior to the scientific method, there really wasn't a good way to gather reliable information. Various medicine men and priests and the like would have made an observation and passed it on to other healers, but not have the resources or education to actually test these observations. Some of the herbs and such would work (for example, willow bark tea), others did not. But without the resources of a modern university research department, better forms of acquiring knowledge weren't really practical. Various herbal and folk remedies that relied on limited observation and lacked rigorous testing were protosciences rather than pseudo-sciences. That is, "not yet sciences", rather than "never sciences". 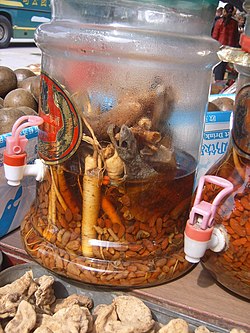 What? It's just an ordinary ginseng liquo-OH MY GOODNESS!

The problem with relying on nationalist science is that there is no such thing. Science is based on a universal, the scientific method. Soviet science, while excellent in some regards, was deficient in others due to reliance on ideology and dialectical materialism.[13]

Despite the death of Mao, the rise of capitalism, the general lack of evidence supporting TCM, and the preference of Chinese citizens for TCM only for minor ailments,[8]:152-153 the Chinese government continues to actively promote TCM within China and abroad,[14][15] likely based on a sense of nationalism. 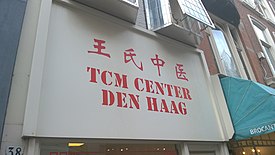 TCM became more widely noticed in the West beginning in the 1970s.[8]:137-138[16] The biggest publicity generator for China at this time was acupuncture analgesia for surgery, which was publicized by James Reston, a New York Times reporter who accompanied Secretary of State Henry Kissinger to China in 1971, in preparation for President Richard Nixon's visit in 1972. Reston had an emergency appendectomy while in China using conventioanal anesthesia,[8]:138 and received post-surgical acupuncture analgesia, which he described as causing diversionary pain.[17] Acupuncture analgesia has been portrayed elsewhere as occurring during surgery,[8]:138-140 but this has largely been debunked: when acupuncture has been used during surgery, it has been used in addition to chemical sedatives.[18][19][20][21]

Notably, the first three Western textbooks on TCM following Reston's article[22][23][24] were based on a 1958 PRC textbook, The Outline of TCM (中医学概论, Zhongyixue Gailun)[25] that was filtered through revolutionary communist fervor.[8]:144-147[19] 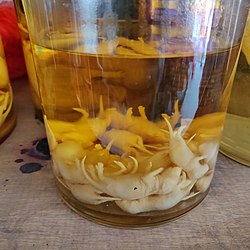 (李時珍). An early book was written in 1505 by the physician Liu Wentai under orders from Emperor Xiaozong, titled Bencao Pinhui Jingyao (Collection of the Essential Medical Herbs of Materia Medica), but this book was not available to the general public and is not now well-known.[26][27]

The Bencao Gangmu has remained in use continuously since its publication, and was replaced in China by the 10-volume Zhong Hua Ben Cao (中华本草, Encyclopedia of Chinese Materia Medica) in 1999.[28] The now-official Pharmacopoeia of the People's Republic of China was published in 2005.[29]

TCM ingredients can range from common plants, such as dandelion, persimmon, and mint, to weird or even dangerous stuff. Some of the more revolting (from a Western standpoint) things found in TCM include genitals of various animals (including dogs, tigers, seals, oxen, goats, and deer), bear bile (commonly obtained by means of slow, inhumane extraction methods), and (genuine) snake oil.[3][30][31] It is worth noting that the sale and use of all of these animal ingredients is illegal in many parts of Asia, Europe, North America and almost everywhere else. New methods of combating the use of these illegal animal parts have been discussed.[32] Urine, feces, placenta and other human-derived medicines were traditionally used[3] but some may no longer be in use.[33]

Literal snake oil (liquor actually) in Macau. These snakes had been drowned alive.

Some of the dangerous ingredients include lead,[34] calomel (mercurous chloride), cinnabar (red mercuric sulfide),[35] asbestos (including asbestiform actinolite,[36][37] sometimes erroneously called aconite[38][39]) realgar (arsenic),[40] and birthwort (Aristolochia spp.).[41] Bloodletting is also practiced. Bizarrely, lead oxide, cinnabar, and calomel are said to be good for detoxification.[42][43][44][45][46] Lead oxide is also supposed to help with ringworms, skin rashes, rosacea, eczema, sores, ulcers, and intestinal parasites, cinnabar allegedly helps you live longer,[44][45] and asbestos is used (including in powder form) for treating impotence, spermatorrhea, premature ejaculation, colic, muscle cramps, prostatitis, endometritis, as well as for kidney-warming and yang-fortifying. Admittedly, the amounts of cinnabar and calomel used in TCM are small enough that the damage they cause is usually reversible.[46] 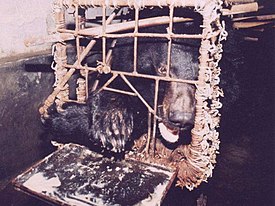 Bear kept in captivity for bile extraction. We have nothing snarky to say here. This is just saddening.

TCM allows for the substitution of ingredients that have the same or similar names in Chinese.[48] In Belgium, a weight-loss spa using TCM herbs gave its clients herbal supplements containing birthwort, and as a result, more than 100 out of 1800 of its patients developed kidney failure, and several also developed urothelial and kidney cancers. In this case, the relatively safe Stephania tetrandra (漢防己, Han Fang Ji) was intended for the clients, but the lethal Aristolochia fangchi (廣防己, Guang Fang Ji) was given to them instead.[49]

In TCM, endangered species such as rhinos, pangolins, sharks, seahorses, manta rays, lions, leopards and tigers are highly prized;[3] rhino horns are considered panaceas which can cure everything from arthritis to cancer, even though studies have shown they do nothing.[50][51][52] Because of this demand, poachers hunt these animals for their body parts in order to sell them to TCM users. Since the 1970s, rhino populations have dropped 90%;[50] while this number may not be entirely due to TCM, it can plausibly be said that TCM is significantly contributing to the extinction of endangered species by encouraging the use of these clearly ineffective as well as illegally and unsustainably sourced substances. 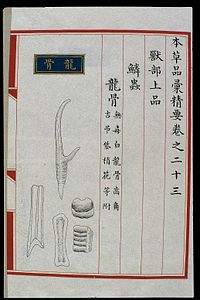