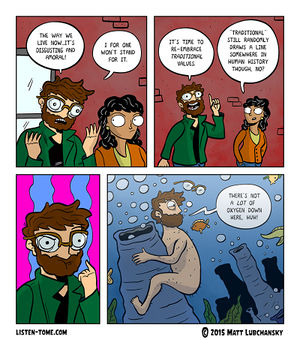 Getting back to nature. (Source)

Appeal to tradition is a common logical fallacy that occurs when it is assumed that something is better or correct simply because it is older, traditional, or "always has been done".

The fallacy is the bastard child of the naturalistic fallacy and the appeal to authority, and is thus an informal fallacy.

This sort of reasoning has the following form:

People often prefer to stick with things that they are familiar with, things they have grown up with, or things that society says "we have always done".

Individuals may believe that "time tested" means "factual" and that "better people than I" were the ones who originally decided a thing, and "if it were wrong, it would have been challenged by now". Tradition is often linked quite closely with "authority".

The opposite of an appeal to tradition is an appeal to novelty, claiming something is good because it is new.