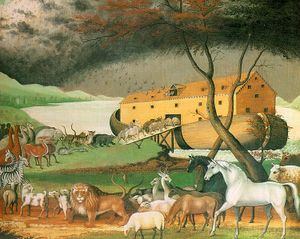 The global flood is a (fairly self-descriptive) catastrophic mythical event recounted in the book of Genesis. The narrative in the scripture tells the story of a great flooding of the entire antediluvian (pre-Flood) world, in which every last human and animal died, except for the ones saved on the Ark, a vessel constructed at God's command by Noah. The flood, according to the Bible, was brought on because every person in the whole world — except eight people God chose — was wicked and needed to be killed. The type of wickedness is left unclear so believers are free to develop imaginative ideas. The narrative does not specify if very young children, babies (or even the unborn!), and almost all the world's animals were killed because they were wicked or if they were just collateral damage (Genesis 6:8).

The majority of intelligent modern biblical scholars interpret the flood story allegorically; for example, they see it as a lesson of God's mercy toward the faithful. Fundamentalists, on the other hand, insist on the literal historicity of the flood account — because if this was made up, then the historicity of the rest of the Bible is in doubt. From this assertion, the entire "science" of flood geology has evolved. As a result, the global flood and the supposed geological facts to back it up are an integral part of young earth creationism and "creation science".