From RationalWiki
(Redirected from Fundamentalists)
Jump to navigation Jump to search

A protest in Duraz, Bahrain against an anti-Islamic film. The banner (in Arabic) reads: "The Islamic nation will not tolerate with those who offend its sanctities"

Fundamentalism is a term used to describe religious movements that reject modernism (particularly scientific thought and secularism), that claim to find all truth, including science, history, and psychology, in their sectarian scriptures, and that often try to impose some degree of religious law on all citizens of any government they are able to control. The type species 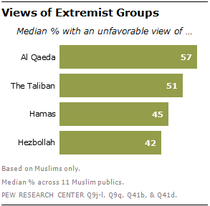 There really is no such thing, since atheism is not a religion and does not have a set of tenets or doctrines. Thus the concept of "fundamentalism" cannot easily be applied to atheism. Nevertheless, terms like "atheist fundamentalist" are often used by critics of atheism to associate prominent and vocal atheists such as Richard Dawkins with the excesses of fundamentalism. Antitheism is closer to fundamentalism, but doesn't fully qualify unless it spirals over the edge into absolute loathing of the very concept of religion and all who subscribe to it (much as religious fundamentalists loathe atheists and adherents of all religions other than their own).