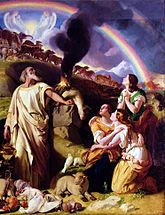 Is it time for me to get drunk yet?

Ziusudra Noah is an Old Testament character who made the second great Covenant with God after the Great Flood. He is also famous for getting drunk, passing out naked, and then cursing his grandson because his son tried convincing him to start attending Twelve Step Meetings saw him naked. Now a major motion picture![2]

Noah preparing for the flood.

Noah was likely born at some time in some place in the Near East, probably in the Fertile Crescent[3] (dubbed by some the "Cradle of Civilization"[4]). As it so happened, no one but God survived to witness this event, making it a True Fact of a Christian nature.[5] On or about Noah's 480th birthday,[6] God informed Noah that it was gonna rain hard and that he had better build himself a boat. A big one! Then God apparently sent down detailed blueprints of a never-before-considered and extremely complex (yet simple enough to build with bronze-age tools[note 1]) Ark[7] that would hold two[note 2] of every animal (including dinosaurs, unicorns, mosquitoes, skunks and dragons!) that lived on the earth along with enough food and complex rain-catching devices to keep those animals alive for roughly 365 days.

At the age of 600 years,[8] Noah got himself, his kids and his pet T. rex onto the Big Boat and they sailed around the world in 40 days.

After the Flood, Noah started growing grapes, and—what else?—turning them into wine. He got drunk, danced naked in front of his tent, and passed out. His son Ham came in and saw him in that condition. Uh oh! When he learned the sordid details in the morning, Noah inexplicably cursed Ham's son, confusingly known as Canaan (rather than cursing Ham himself).[9] Possibly Noah was still drunk at the time, and presumably he swore off drinking afterward.

Noah died 950 years after his birth.[10] Presumably, he carted his beard around behind him in a wheelbarrow, as if he were Father Time himself.

Scholars believe that Biblical compilers based the character Noah on the mythical Mesopotamian figure Utnapishtim, who appears in the Epic of Gilgamesh (circa 2100 BCE), and who also survived a Great Flood by building a boat and got promoted to Godhood[11] for surviving.

This global flood-related article is a stub.
You can help RationalWiki by expanding it.
Retrieved from "https://rationalwiki.org/w/index.php?title=Noah&oldid=2363840"
Categories:
Hidden categories: