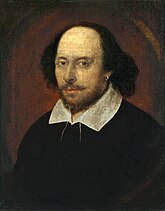 "I never would endure this gripe, hath I not mine shotgun pipe".

The Shakespeare authorship question, also known as "Anti-Stratfordianism," is a fringe theory asserting that William Shakespeare of Stratford-upon-Avon was not the author of the plays attributed to him. First developed as an idea in the mid-19th century, the theory gradually took wing in late Victorian times, establishing a prolific literary vogue for amateur historians and a whodunit-addicted readership, whose mostly unreadable products now tally up to several thousand books and articles.

While all but a few members of the academic community ignore or disparage anti-Stratfordianism, it has achieved a slight degree of acceptance as a legitimate research topic among a small number of tenured professors. In late 2007, Brunel University of London began offering a one-year MA program on the Shakespeare authorship question, and in 2010, Concordia University in Portland, Oregon, a provincial hotbed of anti-Stratfordianism, opened a multi-million dollar Shakespeare Authorship Research Centre, under the direction of Oxfordian Daniel Wright, a Shakespeare scholar and Concordia's professor of English.

By intimating and diffusing a sense that there has been a gross centuries-long cover-up by the cultural and critical establishment of a scandalously repressed "truth", they appear to be trying to mobilise public opinion to pressure academia itself to take them seriously. These are the same sort of crank tactics that have allowed Moon landing conspiracy theories — and more recently, climate change denialism — to take hold.