From RationalWiki
(Redirected from Oregon)
Jump to: navigation, search
Oregon

Were you looking for the Orgone? 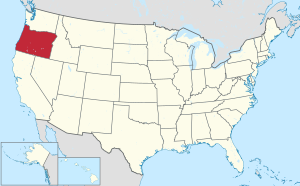 Orgeon is in the more foresty part of America, in the Pacific Northwest.

Oregon is a state in the Pacific Northwest of the United States. It borders California,[note 1] Nevada,[note 2] Idaho, and Washington.

Oregon is also one of only five states that have no sales tax.

Oregon has a reputation for being a liberal "blue state." Both of Oregon's senators are Democrats, as are four of the state's representatives, although one of the representatives, Kurt Schrader, is a Blue Dog Democrat. The sole Republican representing Oregon is Cliff Bentz, whose district is composed of the largely rural eastern part of the state.

The biggest enclaves of liberals in the state (if by "enclaves" you mean "alone comprise over one third of the population") are the cities of Portland and Eugene. The latter hosts the University of Oregon or, as natives like to call it, "The People's Republic of Eugene".

The recent Nazi rallies in Portland didn't come as a surprise. Portland has a deeply ingrained racist tradition going back more than 100 years, and many of its founding fathers were Klansmen, even to the point where many major streets and institutions are named after Klansmen. For a period in the 1920s, the city was entirely controlled by Klansmen. The city was kept pretty clear of Nazis throughout most of the 90s through coordinated attacks by skinheads, ironically. "See a Nazi, hurt a Nazi" was their credo. The streets weren't safe for them, and it made the streets safe for others, which after Mulugeta Seraw

was sorely needed. The Antifa aren't nearly as scary.

Many of the suburbs around Portland and Eugene are fairly evenly split between conservatives and liberals, as is the Willamette Valley which lies between the two cities. The rest of the state is a bit more conservative thanks to big timber, big ranching, big farming, and big fishing.

From 1967-1974, Oregon had a Republican governor - Tom McCall, who, unlike the party today, was a conservationalist and somewhat anti-growth. In his own words, from 1971:

We want you to visit our State of Excitement often. Come again and again. But for heaven's sake, don't move here to live. Or if you do have to move in to live, don't tell any of your neighbors where you are going.

And his 1973 address to the Oregon Legislature:

The interests of Oregon for today and in the future must be protected from the grasping wastrels of the land. We must respect another truism - that unlimited and unregulated growth, leads inexorably to a lowered quality of life.

Oregon also had the (unofficial) James Blaine Society at the time, named after a 19th-century Maine senator, because when he campaigned for president in 1884, Oregon was the only state he didn't visit. The society always tried to depict Oregon in a negative way to deter people from moving to the state. They even sold ungreeting cards featuring Governor McCall, such as this one:

Governor Tom Lawson McCall, on behalf of the citizens of the Great State of Oregon, cordially invites you to visit ...Washington, California, Idaho, Nevada, or Afghanistan…

If you need further evidence of the concentration of wingnuts in Oregon's backcountry, check out the secessionist movement known as the "State of Jefferson."[1][2] Reminiscence to the flag of Tomania (the Nazi Germany-inspired dictatorship from the 1940 Charlie Chaplin movie, The Great Dictator[3]) aside,[4] it's more likely based on the Washington state flag, with a healthy dose of persecution complex as evidenced by use of the double cross as an emblem.

Medford, which is one of the cities that has been proposed as the capital of the new State of Jefferson, is also home base of World Net Daily, and they're very, very sorry for that.

They're really just very old souls (in bodies that were (are?) rarely washed)[edit]

The state also hosts a substantial number of aging hippies incongruously living in small towns—fading relics of the many communes that opened (and soon failed) in the 1960s.[citation needed]

But they won't wash your windows or check your oil[edit]

Oregon and New Jersey are the only states that prohibit self-serve gas stations.[note 3] In the case of Joisey, people (i.e. New Yorkers) theorize that Tony Soprano's paisans like it this way so that their less-capable family member can have gainful employment. The reason Oregon holds on to "mini-serve" stations is because it boosts the number of (poorly) paying jobs available.[note 4] It should be noted that, despite theoretically higher overhead from paying for gas attendants, prices at Oregon and New Jersey gas stations are often competitive with, and sometimes less than, stations in neighboring states.

When Oregon was granted statehood in 1859, it was the only state in the Union admitted with a constitution that forbade black people from living, working, or owning property there. It was illegal for black people even to move to the state until 1926. Oregon’s founding is part of the forgotten history of racism in the American west. Even as late as the early 1960s, white restaurants still wouldn’t serve black people in Portland, black people weren’t allowed in the city’s swimming pools, and the local skating rink set aside a day for black people.[5]

In 2020, Oregon shut down their final coal plant: the state no longer produces any energy from coal.[6]

Oregon is also full of the other kind of lumberjacks. You know, the ones who single-handedly chop down trees with the help of a trusty double-bladed axe or crosscut saw, or in modern times with a big phallic chainsaw. Lately, Weyerhauser uses a big thing that just pinches the trees off and loads them on the truck, so one metrosexual sitting in a cab can do the job of eight lumberjacks.

Some of the latter kind are also the former kind; after all, why else would somebody take a job working in the woods with a bunch of big, burly, sweaty guys unless they secretly enjoy each other's company?

As is also the case in Washington and British Columbia, the official language of Oregon is Chinook. Ssh! Don't tip off the English-only folks to this fact.

For many years, Oregonians could tell non-Oregonians because outsiders always mispronounced "Willamette." Oregonians say "w' LAH mit" while outsiders used to say "will uh MET." That's changed thanks to movies and TV shows that have passed on the correct pronunciation to viewers.[note 6] But, there are still several linguistic tripwires remaining in the Oregon lexicon.

Stay out of the Klamath Falls railroad yard. Seriously. Roger the Dodger[7] may be retired, but stay out anyway.

Oregonians are polite drivers, and it is psychologically impossible for them to honk their horns, or use the passing lane.

This is in stark contrast to unfortunately so many of the drivers in the state's younger brother, who will do just about everything stupid/dangerous/illegal from rushing through the median at 50 MPH to turning left on a red (the sooner after their light turns red and the oncoming lane's light turns green the better) and evading red lights by cutting across parking lots (again at 50 MPH).