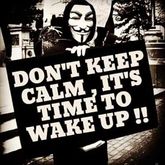 We're all asleep, except for those blasted free thinking conspiracy theorists.

"WAKE UP" (almost always in all-caps) is a common emotional appeal and ad hominem phrase used by hardcore anti-vaxxers, anti-GMO proponents, white supremacists, and other whack-jobs, although the phrase is almost universally associated with conspiracy theorists. The phrase was popular among radical left-wing activists in the 1980s and 1990s (see the Rage Against the Machine song of the same name), but was adopted by other groups who felt their worldviews were being ignored by society. Its usage is usually an indicator that you've wandered into the nuttier tin-foil hat section of the Internet.

Typically, the phrase will be at the beginning or end of a rant, and will be followed by whomever the rant is being directed at. Here are three examples:

And sometimes, when the subject fails to win a convert, their wake-up ad hominem can be followed by yet another ad mominem, as such: "KEEP LIVING IN YOUR FANTASY WORLD!! The REST of us are happy to have WOKEN UP without you!! Enjoy being a fucking SHEEPLE!!"

Where to expect this phrase[edit]

Any comments section with conflicting views concerning stories that deal with conspiracy theories or woo will have at least one example of this. YouTube and Yahoo! News are gold mines for this; in fact, it's basically a mathematical certainty you'll see this. This fallacy can also be found on conspiracy theory webshites, especially blog sites, and EXTRA-especially the ones that happen to have comment sections (assuming the moderator doesn't delete the bad ones).

Typically, the sentences themselves with "WAKE UP" will also feature guilt-tripping, painful rambling, paragraph-long run-on sentences (often with zero commas), LOTS OF CAPS LOCK FOR EMPHASIS, and will contain "logic" that can best be described as not even wrong. The law of exclamation seems to coincide nicely with the phrase, as there is almost always a gratuitous amount of exclamation marks at the end of the sentence!!!!!!!!!!!!!!!!!!!!!111111111111111ONEONEONEONEONE These rants often stem from the horror that the majority of people don't subscribe to paranoid, divorced-from-reality theories about society and need to be told to awaken from their slumbers.

In tinfoil hat personal ads (yes, there are such things) and the like, the writers will sometimes say how long they've been "awake." Although it is amusing to do so, it probably isn't terribly productive to suggest that they have been literally awake that long, no matter how stained their coffee mug is in their YouTube ramblings. Besides all that, it's actually a pretty apt term. Consider, notwithstanding the effects on mortality, what the reasoning capacity for an individual remaining conscious for that long would actually resemble, and compare that to their arguments.

Not only can this phrase or variants be found in the sewers of the Internet but also among political pundits (both left and right) whose style of argumentation relies more on demonizing the opposition as "sheeple"/blind/ignorant masses/insert-your-variation-here than making a coherent argument.

What to do if you encounter someone using this phrase[edit]

Offer them tinfoil While this phrase almost always indicates the user is too far off the deep end to even attempt to bring back to reality; it is not an impossible matter, for most of the "WAKE UP" drones, anyway. Start engaging in a conversation with as much logic and proof data contradicting the specimen as much as possible. Continuing to engage in a conversation will most likely result in a million ad hominem attacks, or 'logic' so brain-meltingly horrifying that it may make you lose faith in humanity. But, DO NOT GIVE UP! Remember in your mind the fact that all are born with an empty memory which is later filled with truth and "bullshit disguised as truth." Thus, while in the mind of the "WAKE UP" messenger, any attempts to reason merely confirm the existence of brain-dead, conforming sheeple, it also chips away at their faith. So, keep going if you got nothing better to do.