Not an effective way to cook s'mores. 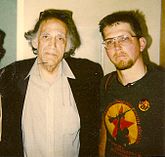 Texas v. Johnson was a 1989 US Supreme Court case in which the Court determined that desecration of the American flag, even including burning, was a form of protected symbolic speech.[1] This invalidated prohibitions against flag desecration that were enforced in a whopping 48 states.[2]

As part of a protest against the Reagan administration, Gregory Lee ("Joey") Johnson, outside the Republican National Convention in Dallas, doused an American flag in kerosene and lit that fucker up. Other demonstrators present chanted "America, the red, white, and blue, we spit on you."[3] While no violence occurred, many witnesses were highly offended, and one man retrieved the flag's remains and buried them in his backyard according to military protocol.[4]

Johnson was later charged with desecration of a venerated object by Texas courts, fined $2,000, and sentenced to a year in prison.[5] After the Texas Court of Criminal Appeals reversed the decision, the case made its way to the Supreme Court.

Johnson's appeal was based on the idea that his actions were "symbolic speech" and thus protected by the First Amendment. In a controversial 5-4 decision, the Court, including Chief Justice Brennan agreed with Johnson and overturned his sentence.[5] The majority decision noted that protecting freedom of speech often means defending actions and words that society finds offensive and that general outrage is not strong enough reason to suppress speech.[6] Both dissents to the case cited the American flag as a uniquely important symbol in American culture which justifies special protections.[6] Justice Stevens explained that he viewed the flag as " a symbol of freedom, of equal opportunity, of religious tolerance, and of good will for other peoples who share our aspirations. ... The value of the flag as a symbol cannot be measured."[7]