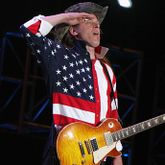 The Flag Police are a humorous creation of the New Hampshire Gazette ("The Nation's Oldest Newspaper")[note 1] and a parody of overzealous patriotism in response to jingoistic efforts by some to pass a constitutional amendment (or other strong law) banning "flag desecration."[note 2]

What this loosely organized mob of digital camera wielding jokers do is take pictures of flags being "proudly" displayed that are either in poor condition (torn, faded, etc.) or displayed without proper respect (touching other objects, etc.). They then print these photos to shame the flag wavers in question into doing something about it.

Their basic point is that if we are to have a strong flag protection law, many of the people and organizations who fly the flag will end up being made into lawbreakers - or, said equally unclearly, that actual instances of intentional flag desecration are far rarer than idiots who don't display it correctly in the first place.

In the months following the 9/11 attacks, the Flag Police declared a general amnesty, due to the thousands of flags being inappropriately draped[note 3] or flown just about everywhere in a display of nuclear superpower solidarity.[note 4]

The fixation in the United States with their flag is a mystery to many other nations, some of which are happy to have their flags misused by printing the design onto underwear or other items of clothing, whereas this would technically be unacceptable with the U.S. flag. The flag is apparently more respected than the President (well duh!) and is seen as an embodiment of all that the nation holds dear, and it even has a national anthem and a brainwashing pledge just for it. This makes annoying overly patriotic Americans very easy, since all you need do is burn or trample their flag to generate a response out of all proportion.[note 5]

What the flag police are ignorant of[note 6] is the fact that until 1912, the federal government had no standards or statutes whatsoever regarding the shape, size, design and/or display of Old Glory. In fact, the design of thirteen alternating red and white stripes and the navy blue field in the upper-left corner with a number of white stars that corresponded to the number of states at the time was actually traditional, not mandated. (You might even say that pre-1912 flag makers and owners often used radical designs and manners of display to express their feelings towards the USA.)[1]