Edwards v. Aguillard was a case heard by the Supreme Court of the United States in 1987. The Court ruled that a Louisiana law requiring that creation science be taught in public schools alongside evolution was unconstitutional, because the law was specifically intended to advance a particular religion. At the same time, however, it held that "teaching a variety of scientific theories about the origins of humankind to school children might be validly done with the clear secular intent of enhancing the effectiveness of science instruction."

During the Supreme Court oral argument (former) Justice John Paul Stevens challenged the assertion by creation science defender Wendell Bird that the purpose of the statute was to promote academic freedom: "May I ask about academic freedom for a moment? Would you say it would advance academic freedom if the school was told you cannot teach a student German unless he's also willing to study French?" Bird eventually replied after trying to avoid the question several times "Yes, it would", claiming the purpose was "a basic concept of fairness, teaching all the evidence."[1][2] 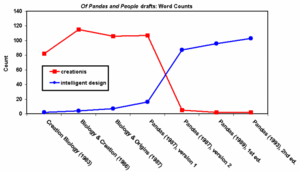 Use of the terms "creationism" versus "intelligent design" in sequential drafts of the book Of Pandas and People.