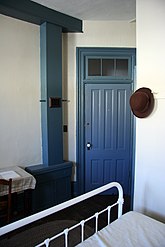 Where it all began

The Gideons or Gideons International are the people responsible for your finding a Bible in your hotel room. They're pretty decent as missionaries go — they unobtrusively provide the message, and let you read as you see fit. As well as distributing Bibles to hotel rooms, they also provide them to military personnel free of charge, but not to the general public.[1] It's not a specific denomination, but is an organisation open to members of most Protestant churches who're approved by their pastors and aged over 21. There's one other requirement: you must be a man.[1]

It was founded around 1899 by John H. Nicholson and Samuel E. Hill, two businessmen of Christian persuasion who in 1898 had been forced to share a hotel room while travelling. Rather than do anything gay, they discussed religion and set up an evangelical organisation.[2][3]

The organisation is named after Gideon

, a military hero who (after procrastinating a while) thumped the Midianites in the Book of Judges, and is also praised in Hebrews 11:32.[3]

They started distributing bibles to hotels in 1908, beginning with the swanky-sounding Superior Hotel in Superior, Montana. Contrary to myth they don't sneak into rooms at night and slip the Bibles into desk drawers: they give a supply to the hotel manager.[2] They claim to believe that the Bible is "the inspired, infallible, inerrant Word of God".[1] They also claim that around 25% of people who stay in a hotel room read the Bible.[1]

The dark side of the Gideons[edit]

While those outside of the Bible Belt believe the above, they do not know the other activities these folks engage in. The Gideons are well known for going as near college campuses as possible and very vocally proselytizing. Even worse, though, they often go into public schools to proselytize children, fifth grade and above.[note 1][4][5][6][7] When school boards and their members that have explicitly endorsed the Gideons' actions have been confronted over its unconstitutionality by parents and legal groups such as the ACLU, they have in certain cases responded that they are simply attempting to help the poor students,[6] or that interaction between church and state is inevitable, so we might as well tolerate it. There has also been controversy over Gideons distributing Bibles in schools in the UK.[8]

Among the Gideons only men hand out Bibles; women are not allowed to become Gideons and can only serve the men as auxiliaries.[9]