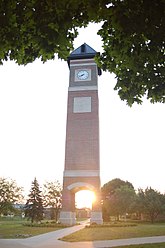 The clock tower at Cornerstone University

Founded in 1941, Cornerstone University started out as Baptist Bible Institute and classes were run out of the Wealthy Street Baptist Church. In 1944 the school built a campus offering two- and three-year degree programs in ministry. In 1945, seminary educated faculty were employed and the Pastoral Ministries program was formed. To be accepted into the program, a student had to have a two-year education including classes in Greek and philosophy. In 1955 the Institute required a bachelor's degree for admission to the Pastoral Ministry program; in 1963, the State of Michigan allowed the Institute to offer Bachelors' degrees in Religious Education and Music. Soon the school became a legal undergraduate degree-granting school, and in 1972 the school began to offer degrees in sciences and arts, and was recognized by the State of Michigan. By 1977 the school gained regional accreditation through the Higher Learning Commission. In 1993 the Grand Rapids School of Bible and Music merged with Grand Rapids Baptist College and Seminary (the new name of Baptist Bible Institute) which would be named Cornerstone College. In 1993 the school of Professional and Graduate school was formed with programs in Bible, Ministry, Business and Accounting. In 1999 Cornerstone College and the separate Grand Rapids Baptist Seminary merged to form the current Cornerstone University In 2003 the Grand Rapids Theological Seminary was formed as a ministry graduate school.

Cornerstone's doctrine is known as the "University Confession".