From RationalWiki
(Redirected from ACLU)
Jump to: navigation, search 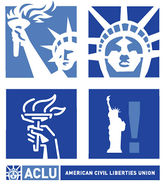 The American Civil Liberties Union, or ACLU, is a United States-based organization dedicated to protecting human rights. This often leads them into conflict with conservative groups, but their dedication to free speech many times also leads them to defend the free speech rights of racists, bigots, and other hatemongers.

According to their website, the main goal of the ACLU is to protect First Amendment rights, the right to equal treatment under the law, the right to due process and the right to privacy. Since it was founded in 1920, it has grown to over half a million supporters. The ACLU is split into two separate entities: a legislative lobbying group that pressures the American government to stay true to its values of freedom, and a litigation group which handles around 6,000 court cases each year.

The ACLU maintains 53 local chapters and affiliates, including one in each of the fifty states.

Although the ACLU is known for defending pretty much anyone who might need their services, it has come under fire for being an "atheist" or "anti-Christian" organization. This is generally based on its advocacy of the separation of church and state, reproductive rights, and LGBT equality, all of which pits it constantly against the Religious Right. Such a criticism is often part of the fundamentalist persecution complex, as neutrality towards religion is somehow considered to be hostility towards Christianity, and simple disagreement is mistaken for a desire to persecute. Less commonly, the ACLU is criticized because some founders of the ACLU were irreligious and had socialist ties.[1] So scary.

These misconceptions are fueled by a certain ignorance of the law regarding religion in the US. An attack on public government religious expression generally has no bearing at all on the freedoms of private individuals and organizations, but the two are frequently confused in the public's mind.

In truth the ACLU has no stance on any particular religion (or atheism), and frequently represents Christians.[2] However, it is likely that it will remain controversial indefinitely, partly because essentially all of its positions irritate social conservatives, and partly because the ACLU tends to represent people whom everybody hates (since popular opinions rarely need protection). The ACLU takes the position that strict separation of church and state means public school buildings (for example) should not be used as space for Bible study groups, and tax dollars should not fund religious or parochial schools under the guise of charter schools, in both cases on the grounds that this would constitute the government violating the establishment of religion. This is the source of much of the Religious Right's dislike of the ACLU, but they often misrepresent it as the ACLU being against any public display of religion, such as manger scenes at Christmas on private property and the rights of individual students to pray in class. This is untrue, as the ACLU supports free speech including the free expression of religion; what they oppose is government funding or lending official (or the perception of official) support to religious activities in violation of the Establishment Clause. Furthermore, the ACLU has defended the rights of religious bigots to express themselves, although it does not condone the contents of their speech.

The ACLU has been a key player in several famous civil liberty cases since 1920. Some of these have been controversial because of the organization's history of fighting for freedom of speech regardless of what the speech is and for people's rights regardless of who those people are:

The ACLU has been involved in some way (usually through amicus curiae briefs) in essentially every major national civil rights case since Brown. Among their more controversial cases are cases regarding religious practice in schools, an anti-discrimination case involving the Boy Scouts in 2000, and several cases involving pornography, including child pornography.[4]

ACLU co-founder Felix Frankfurter and former ACLU lawyer Ruth Ginsburg both became Justices of the Supreme Court of the United States. Oddly enough, early in her career Ginsburg was turned down for a clerkship by Justice Frankfurter; he only hired male clerks.[5][6]

The ACLU was formed in the aftermath of the Palmer Raids, in November 1919 and January 1920, when as part of the first Red Scare, the US Department of Justice under attorney general Alexander Mitchell Palmer rounded up large numbers of leftists, anarchists, and communists, many of whom were immigrants; 10,000 were arrested and 556 eventually deported.[7][3] While before its foundation other organisations like the NAACP had campaigned for the civil rights of individual groups (African-Americans in the case of the NAACP), the ACLU was noteworthy as the first group that set out to defend the rights of all.

Its immediate precursor was the National Civil Liberties Bureau

and the women's suffragist Crystal Eastman

, both of whom were involved in the founding of the ACLU. The NCLB had formed from a faction of the American Union Against Militarism

, a broad anti-war organisation which split in 1917 over disputes between radical communists and moderate members. Eastman's actions were limited by ill-health after 1918, and Baldwin (a radical socialist who was initially influenced by Emma Goldman but later became disillusioned by Stalin) went on to lead the NCLB and serve as executive director of the ACLU until 1950.

Sixties radical Abbie Hoffman, in a section of Steal This Book on legal help, advised readers to beware of the ACLU's reputation for losing the case while making a legal point. His implication was the ACLU's interest in a case may or may not always coincide with the best interest of the defendant. The ACLU does tend to be selective in what cases they involve themselves in, based on what will effectively establish future legal precedents. More recently Wendy Kaminer, a former ACLU board member, wrote a book-length criticism of the ACLU (Worst Instincts: Cowardice, Conformity, and the ACLU), accusing the organization of being more interested in fundraising and riding on their past reputation than in seriously challenging Bush- and Obama-era attacks on civil liberties and privacy in the wake of 9/11. It's also been criticized by Ira Glasser, former chairman of the group, for defending free speech only when it would not harm minority groups in their judgment, and becoming a more general-purpose advocacy group on progressive issues rather than civil liberties specifically.