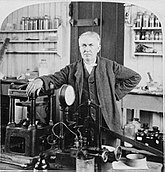 Edison can't wait for the photographer to piss off.

Thomas Alva Edison (1847-1931), "The Wizard of Menlo Park", was an ingenious American inventor, who was not particularly kind towards his rivals. In fact, he was pretty much an all-around jerk and asshole.[2]

Apart from the phonograph, most of his inventions were improvements and adaptations of existing products, although this should not detract from the fact that he brought, for instance, the incandescent light bulb from being a laboratory device to commercial viability.

Edison's major rivals, during the late 19th century, were George Westinghouse and Nikola Tesla, who had once been an associate of Edison. In the so-called "War of Currents", Edison favored using "Direct Current" or "DC"-based power systems, arguing that DC power was safer than the more powerful "Alternating Current" or "AC" power systems which Westinghouse and Tesla were developing. Ultimately AC power came to be used much more widely, though Edison remains a more famous figure than his adversaries, due to his inventions and his business successes.

He claimed opposition to violence, stating;

"I am proud of the fact that I never invented weapons to kill."[3]

According to a quote of disputed[4] authenticity, Edison's philosophy of nonviolence extended to animals as well, about which he allegedly stated:

"Nonviolence leads to the highest ethics, which is the goal of all evolution. Until we stop harming all other living beings, we are still savages."

These two quotes seem to be outright lies as Edison promoted use of the electric chair. However it should be noted that he never electrocuted an elephant publicly and in fact "Topsy" was killed by a circus for reasons wholly unrelated to Edison.[5] While already obviously unrelated to the war of currents as it happened in 1903, approximately a decade after that conflict concluded, the only relationship the incident has with Edison is that his company's filmstock was used to record it. There was, however, the unfortunate bit that in his effort to convince people of the danger of AC he killed a number of animals...so maybe the consideration for living beings didn't really apply when his profits from electricity generation were at stake.[6]

Edison has been accused of being an atheist based on some of his remarks, though it is almost certain that he was either an agnostic or most likely a deist. While he did make statements regarding religion such as these:

"Nature is what we know. We do not know the gods of religions. And nature is not kind, or merciful, or loving. If God made me—the fabled God of the three qualities of which I spoke: mercy, kindness, love—He also made the fish I catch and eat. And where do His mercy, kindness, and love for that fish come in? No; nature made us—nature did it all—not the gods of the religions."[7]

"So far as the religion of the day is concerned, it is a damned fake … Religion is all bunk."[8]

"I have never seen the slightest scientific proof of the religious ideas of heaven and hell, of future life for individuals, or of a personal God."[9]

And while he also did not believe in an eternal soul or an afterlife:

"…it is doubtful in my opinion if our intelligence or soul or whatever one may call it lives hereafter as an entity or disperses back again from whence it came, scattered amongst the cells of which we are made."[10]

"My mind is incapable of conceiving such a thing as a soul. I may be in error, and man may have a soul; but I simply do not believe it. What a soul may be is beyond my understanding."[11]

It is also clear that he believed in a supreme being of some kind, which essentially lands him in the deist camp:

I do not believe in the God of the theologians; but that there is a Supreme Intelligence I do not doubt.[12]

I believe in the existence of a Supreme Intelligence pervading the Universe.[13]

His final words are often taken by certain people with certain beliefs as a sign that he had a vision of the next world:

"It is very beautiful over there!"

These have sometimes been reported as his last words, but were actually spoken several days before his death, as he awoke from a nap, gazing upwards, as reported by his physician Dr. Hubert S. Howe.[14]

In an ironic finale, Edison's wife signaled his death to the press by turning a light on, not off, in a window of the house.