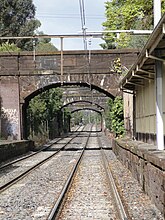 Skyrail, also known as Sky Rail, Skyrails, Those SKYRAILS[1] or simply elevated rail, is a term developed by opponents to an infrastructure project to remove road/rail level crossings in Melbourne, Australia.

The manufactured controversy began in 2014 when the Australian Labor Party won the state election. One of their promises was to remove 50 level crossings across metropolitan Melbourne. This reflected concerns about the high level of deaths, with 139 people killed at level crossings in Victoria between 2002 and 2012.[2] The Level Crossing Removal Authority (LXRA) was created and the list of projects published.

There are four main options for removing a rail/road level crossing:

The LXRA began evaluating each site's context to decide which of the four options would be most suitable to implement. Factors to consider included the surrounding land uses, impacts on open space and minimising disruptions. Some removals, such as Bayswater, Bentleigh and Glen Iris, were determined to be rail under road. Others, such as Noble Park, Carrum and Murrumbeena, have been designated as rail over road.

There are some unique advantages to rail over road including:

Despite these benefits, the denizens of angry old people...

But how could that possibly be controversial?[edit]

After their crushing defeat at the 2014 election, the Liberals needed something to hang their hat on. They picked the location of rail over road level crossing removals as their primary target, trying to coin the term 'skyrail' as an attempt to scare people. They decided to generate controversy with small groups of residents in the marginal seats around the Carnegie and Carrum level crossing removal projects, where large stretches of elevated rail were proposed. You know, like there already in many

other parts of Melbourne and around the world.

But the flurry of exaggerated media coverage from the Herald Scum was not enough. Small "community groups", many funded and supported by the Liberal Party,[3] popped up everywhere and immediately began to spout errant nonsense. They did not necessarily object to the removal of the level crossings per se, but rather the fact that elevated rail was to be installed. Several social media accounts, websites and online petitions began to circulate.

The assertions made by anti-skyrail protesters are a veritable smorgasbord of logical fallacies. From appeal to consequences to non sequitur, you are sure to find one somewhere within their barely-comprehensible screeching.

"Paedophiles will be able to watch children from the trains!"[edit]

One of the more ridiculous claims of the anti-skyrail brigades. The Herald Sun and its associated media have lapped up the appeal to fear that such a claim was supposed to generate. Karlee Browning, self-proclaimed "president of No Sky Rail", said: "I am worried about the safety and privacy of my children, that they are not going to be preyed upon by paedophiles looking into the pool when they are swimming."[4]

One anti-skyrail activist seemed particularly fixated on this claim. She was known to regularly harass train passengers by yelling such sentiments and becoming aggressive when people confronted her disruptive behaviour. Presumably she got so angry from her own propaganda that she simply imploded.

"Elevated rail means that trains will have to use more electricity to go up and down again!"[edit] 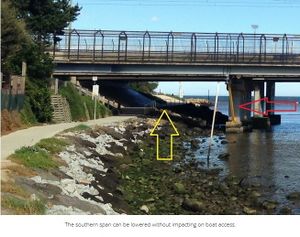 Let's draw some arrows on a photo. That'll fix the problem.[5]

Another particularly daft argument. This one contends that trains will use more energy on elevated rail rather than trenched rail. Bear in mind that this argument was developed by people who probably failed primary school science.

The 'No Sky Rail Frankston' websites articulates the contention in this way:

Not only would this require making extensive and expensive modifications to the over 500 trains that operate on Melbourne's rail network, this argument only works if you suspend the laws of physics. As for diesel trains…

Because physics behaves differently when you do exactly the same thing over the same height and distance when the track is elevated. Apparently.

"My property values will go down!"[edit]

Other than being a classic case of NIMBY, the irony of this argument is that the exact opposite is far more likely to happen. Many of the level crossing removals have stimulated property investment and positive land use changes in the vicinity.

As shown in the suburb profile for Noble Park, where an elevated station was recently constructed, prices have continued to increase for properties in the surrounding area even before the works were completed. In addition to this, demand for rental properties experienced a sudden increase in December 2017 when works on the station were nearing completion and maintained their status in the following month.[6] Of course, this may also be a case of coincidence as no objective analysis of this particular case has taken place.

Nobody has yet been able to articulate any sort of reason as to why this would be the case. As with property values, the opposite effect is far more likely to occur. In fact, many businesses located near LXRA works have experienced a significant increase in patronage due to workers on the railway buying their products (e.g. lunch) over the period of construction.

In the long-term, increased density of people living in the area will result in a more customers being located within walking distance of the shops. The vastly improved ability to move between areas would also allow more customers to visit; something hitherto impossible due to the presence of a railway track. Moreover, more pleasant surroundings created by the elevated rail (e.g. parkland, playgrounds) are likely to result in increased visitors to the area.

Why does a such a small group of angry protesters matter?[edit]

Consider the case of Bonbeach and a few similar railway stations in the south-eastern suburbs of Melbourne. The train line here run very close to the coast at a low level. The logical solution at this point is to elevate the tracks to prevent things like flooding (not just from climate change) and sandy soil.

But the ALP, fearing a political backlash in a marginal seat, instead decided to override expert advice and mandate that a rail under road solution be implemented. This involves, among other things, digging a deep trench in flat and sandy soil not 400 metres from the water's edge. Nobody can see anything going wrong with such a design.

In any case, this project will now cost the public hundreds of millions of dollars extra in order to conform to the misinformed and ridiculous rantings of a few local nobodies. The engineering solutions for trenched railway lines are very difficult and very expensive; much more so than an elevated rail bridge. Don't believe us? Listen to the actual experts, not a handful of retired bankers and fish and chip shop owners with too much time on their hands.

Despite the best efforts of the local media, the Liberals and a few bored retirees, the vast majority of people have no problem whatsoever with elevated rail as an option for the removal of level crossings.[7]

Most of the shouting occurs on Twitter. While there are some Facebook pages and websites, these are not as active as the #noskyrail hashtag on Twitter.

Bear in mind that many of these anti-skyrail sites are duplicates run as fronts for other organisations (e.g. the Liberal Party) and are an echo chamber unto themselves. Count the number of accounts that SHOUT IN CAPS for some entertainment.

If you are in the mood for a severe headache, enjoy!