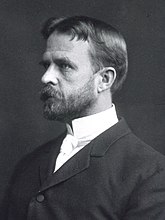 Thomas Hunt Morgan (1866–1945) was an American evolutionary biologist, geneticist and embryologist. He is known for his discoveries relating the role the chromosome plays in heredity.

Morgan received his PhD from Johns Hopkins University in zoology in 1890 and researched embryology during his tenure at Bryn Mawr. Following the rediscovery of Mendelian inheritance in 1900, Morgan's research moved to the study of mutation in the fruit fly Drosophila melanogaster. In his famous Fly Room at Columbia University, Morgan demonstrated that genes are carried on chromosomes and are the mechanical basis of heredity. These discoveries formed the basis of the modern science of genetics.

In Evolution and Adaptation (1903), Morgan argued the non-Darwinian position that selection could never produce new species by acting on slight individual differences. He also rejected Darwin's theory of sexual selection and the Neo-Lamarckian theory of the inheritance of acquired characters. Morgan was not the only scientist who rejected natural selection. This period from 1875 - 1925 has been called The eclipse of Darwinism. The mutation theory of evolution first denied natural selection, but this was shown to be incorrect due to discoveries in Mendelian genetics.

Morgan was a proponent of De Vries mutation theory of evolution but converted to Mendelian genetics in 1910 and later on in his career embraced natural selection after discovering many small stable heritable mutations in Drosophila. Morgan discovered the relevance of mutations for evolution is that only characters that are inherited can have an effect in evolution. Scientists of this period including Morgan began to reconcilise Mendelian genetics with natural selection.[2] Morgan contributed to the neo-Darwinian synthesis, despite his criticism of natural selection at the beginning of his career.

Morgan (1932) considered sexual dimorphism to be explained by a proximate mechanism - hormonal difference between males and females and denied that it needed an evolutionary explanation by sexual selection.[4]