Sexual selection is the mechanism Charles Darwin proposed when he tried to understand a conspicuous class of traits that defied explanation by ordinary natural selection for improved survival. In his book The Descent of Man (1871) he described the traits of sexual selection as "sexual differences... such as the greater size, strength, and pugnacity of the male, his weapons of offence or means of defence against rivals, his gaudy colouring and various ornaments, his power of song and other such characters." Darwin wrote these traits are favoured by competition over mates which he termed "sexual selection".

Andersson (1994) reports that the idea that conspicuous male display, colors, feather plumes, and other secondary sex ornaments evolve through female choice met much early skepticism from the scientific community. Alfred Russel Wallace for example rejected the entire concept of sexual selection and argued that the traits could be explained by ordinary natural selection which increases the fighting power and survival of males. The biologist Thomas Hunt Morgan also rejected sexual selection writing "the theory meets with fatal objections at every turn" and regarded it as refuted. It wasn't until after a century had passed that sexual selection began to be accepted by the scientific community. In the 1970's the theory of sexual selection gained support from genetic and game theory models, and from a variety of empirical studies.[1] 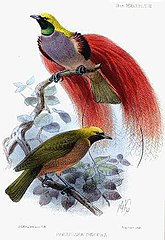 As mentioned above, sexual selection is any selection acting upon mating success, and it can come in two forms. The first of these is intersexual selection (often called "female choice", though females don't always do the choosing). This is the type of selection most people think of when they hear the term, and it operates via the choice of the limiting sex when it comes to mating partners. In evolutionary biology, the limiting sex is the sex which has the higher parental investment and thus faces the most pressure to make a good mate decision. When this is the case, the pressure is then on the other sex to evolve traits that make them attractive to the limiting sex. Usually these traits begin as honest signs of fitness (the "good genes" theory), but runaway sexual selection can result in extreme expressions of traits, which natural selection would normally "punish".

Another form of sexual selection is called intrasexual selection or mate competition. As its name implies, this selection comes into play when members of one sex compete with each other for mating access to the other sex. These sorts of pressures allow for the large relative sizes of males and their competitive nature. This form of selection is different from intersexual selection because the limiting sex is not making the choice; rather, the most competitive [usually] male gets to mate with the local females.

It may be difficult to envision how runaway sexual selection could give rise to the wild array of ornamentation we see today, so a walk-through may be helpful. Let's start with some species of bird, and let's say this bird's fitness is directly related to its tail length. As natural selection operates, the average tail length increases, because the longer-tailed specimens have more offspring. If, at some point, a mutation arises which codes for a female preference for long tails, then natural selection would favor this. It would, after all, be beneficial for a female to prefer longer-tailed males if their offspring will also have longer tails and be more fit (this is the basis of the "good genes" theory).

Other examples of sexual selection[edit]

Fighting over a mate.

Sexual selection accounts for many traits in the animal kingdom which would be impossible via natural selection alone. The examples are followed by their category (female choice or mate competition).

Creationists are fond of claiming that sexual selection cannot work to promote evolution because new phenotypes will not be regarded as attractive, but rather as freakish and abnormal.[3][4] This ignores the fact that changes are gradual and that many changes in appearance of species have been considered attractive, and that small changes are unlikely to be perceived as freakish. In fact, sexual selection even acts on traits with little or no genetic basis, such as pair-bonding.[5] Also, many new traits that are selected for, while significant, were not and are not perceived as freakish, but rather as attractive, such as light features in Caucasians.[6][7] In fact, white people can be considered mutants,[8] something black supremacists are fond of pointing out, their claims (ironically) usually being coupled with denying evolutionary theory.[9][10]