Oligopoly is an economic concept referring to a state of competition where the market for some good or service is dominated by a few large firms. However, there are usually not enough firms to allow meaningful collusion. So long as there are more than two firms (duopoly) a market may be oligopolistic although there is no exact criteria for determining when exactly a market is oligopolistic.[1] Oligopolies have become fairly common in the modern developed world dominating a number of markets.[2] 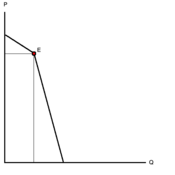 The diagram for oligopoly displays a downward sloping demand curve with a distinctive kink in it, roughly the equilibrium point. Above the kink, the slope is much flatter, indicating a zone where demand will be more elastic. Below that point, the line is far steeper, indicating a more inelastic zone. A firm will try to keep their price near the breaking point (E). Anything above that won't yield additional revenues, as consumers will be willing to switch over to the competitors given the high degree of elasticity. Below the kink lowering the price won't yield much additional revenue either. The inelasticity of demand there means that big price cuts don't significantly increases revenues. This may also result in a race to the bottom as firms try to outdo each other in cutting prices.

Automotive, energy, media, and cell phone markets tend to be dominated by a few large firms.[3][4] The American auto market was mostly dominated by General Motors, Ford Motor Company, and Chrysler Automobiles until the 1970s when more Asian and European manufactures began to compete. Although not as prominent an international force as it was when first created, OPEC has made the world oil market more oligopolistic than it otherwise might be.

Despite having important market power, no single firm in an oligopolistic setting can force others to actually do its bidding in spite of any deal making. Because of this, firms are constantly trying to anticipate the actions of other companies and outmaneuver them.[5] If one firm were to raise prices it wouldn't necessarily increase profits. If it were to cut prices, this may lead to a bitter price war between the major market players. Great news for consumers, but horrible for shareholders and upper management.[6] From the perspective of a government oligopolies may be advantageous if they collude with the government and serve as informal backers in exchange for government favoritism. At the same time governments may also carefully analyze them as potential threats and use antitrust laws to weaken them.