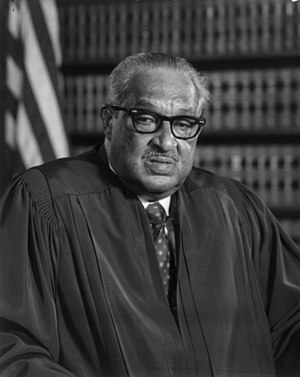 Thurgood Marshall, 1976, is politely unimpressed by your argument and about to rip you a new one.

Thurgood Marshall (1908—1993) was a lawyer for the NAACP and later the first African-American United States Supreme Court Justice. He is most remembered for having filed and won Brown v. Board of Education.

Justice Marshall was a reliably liberal voice on the Supreme Court. During the administration of George H. W. Bush he took ill and resigned. Not wanting to seem racist, Bush appointed Clarence Thomas to the position. While Marshall was surely waiting for a Democratic president before he resigned, congestive heart failure made it irresponsible to continue. Marshall passed away four days after Clinton's inauguration.

This law-related article is a stub.
You can help RationalWiki by expanding it.
Retrieved from "https://rationalwiki.org/w/index.php?title=Thurgood_Marshall&oldid=2446019"
Categories:
Hidden category: