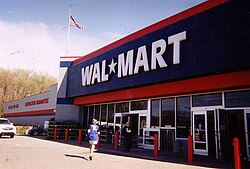 It looks like it's too nice a day to spend inside some big crappy shop.

Walmart ✲ (formerly Wal-Mart) is the official Chinese import outlet in the United States a major department store chain that has become one of the most successful retailers in the world. Since 1989, it has been the largest retailer in the United States, surpassing Kmart. Walmart is known for building stores bigger than some shopping malls that sell more things than some shopping malls. Because of its status as one of the most prominent companies in the world, Walmart has become a significant symbol of corporate America.

Walmart is the biggest private sector employer in the USA, boasting over 2 million associates.[1] Walmart remains the largest company in the world by revenue.[2] It also has the accomplishment of making every Occupy Wall Street argument seem justifiable.[3]

The company was founded by Samuel "Sam" Walton (1918-1992). Walton's father Thomas was a former farmer who made his living during the Great Depression foreclosing on farms for Thomas's brother's Walton Mortgage Company. Sam Walton attended the University of Missouri, joining the elite QEBH honor society, and afterwards took up a graduate post at JC Penney. He spent World War Two in the US working for the Army Intelligence Corps, and upon demobilization borrowed $20,000 from his father in law and bought a variety store in Newport, Arkansas. He continued in this line of work, opening Walton's 5 & 10 in Bentonville, Arkansas in 1950, and the first Wal-Mart in Rogers, Arkansas in 1962.[4]

The Wal-Mart empire was built on a number of principles to keep costs down and reduce the profit margin in exchange for higher sales, reckoning that low prices were more important than anything else. He situated stores near his warehouses and had his own trucking company; he leaned hard on suppliers, and forced competitors to drop prices and cut corners to compete. The store chain was initially privately owned, and this made the Walton family some of the richest people in the world, although it began to offer stock more widely in 1970. Since then it has bought a lot of other companies (including Seiyu in Japan, and from 1999-2020 ASDA in the UK[5]), expanded worldwide, and seen a lot of controversy.[6][7]

Walmart receives a large amount of criticism from groups such as labor advocates and local merchants, who claim that it encourages unjust wage labour, shuts down local providers and stores, and is generally evil as a matter of corporate policy.

Walmart's employment methods and corporate policies were defended in an episode of Penn & Teller: Bullshit!. As usual with P&T, libertarians rejoiced greatly.[8] Most liberal sources, on the other hand, have argued that Walmart's employment practices result in greater dependence on government handouts because of the subpar wages and benefits offered by the company.[9][10][11] Walmart has enjoyed monopolizing against its competitors,[12] and it's had an egregious history with "dead peasant" life insurance policies on associates.[13]

Walmart also tends to contribute heavily to Religious Right causes, especially Walmart heirs in the Walton family. In 2006, Walmart saw controversy in its initial refusal to fill prescriptions for the "morning after" birth control pill.[14]

Recently, it has become popular among demographers to compare the number of Walmart stores in an area of the United States with the number of Starbucks: the ratio that results is often seen as an indicator of "yuppieness."[15]