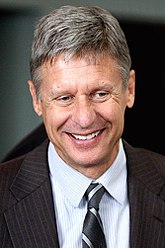 Gary Earl Johnson (1953–) was the 29th Governor of New Mexico, and a human cloud of weed smoke presidential nominee for the Libertarian Party in the 2012 U.S. presidential election and the 2016 U.S. Presidential Elections. Some of the policies he advocates for include foreign non-interventionism, limited government, and privatization. He holds the prestigious position of being the only presidential nominee not to have been insulted by the UK prime minister Boris Johnson (no relation), although admittedly that may be because Boris has never heard of the chap.[2]

Gary Johnson served as Governor of New Mexico from 1995 to 2003. He was elected in 1994 as a Republican, benefiting from a split in the liberal vote, when former Lt. Governor Robert Mondragon ran as the Green Party candidate for Governor, receiving 10.5% of the vote. He was elected to a second term in 1998.

Near the end of his second term, he announced his opposition to the failed War on Drugs and his support for legalization of marijuana. He has campaigned in support of marijuana legalization in several states, most recently campaigning for California's Proposition 19 in 2010.

While in office, Johnson was criticized for opposing funding for an independent study of private prisons after a series of riots and killings at the facilities.[3]

was critical of Johnson, calling him a "hard-core conservative" who "ruled the state like a right-wing authoritarian" and only embraced marijuana legalization in his second term for populist gain.[4]

The poverty rate stood at 18% in 2000 and 18.4% in 1999, beaten both times only by Louisiana, Mississippi, and the District of Columbia.[5][6] Its three-year average between 2000 and 2002 (the last leg of his last term) was the highest in the country besides Arkansas.[7] But hey, they had a budget surplus. Who needs high-quality schools and well-paying jobs when your budget looks nice and tidy? Those stupid homeless people can just eat themselves after all...

He endorsed the Republican presidential candidacy of Congressman Ron Paul in the 2008 election.[8]

Johnson came back in 2016 and has run as a third-party candidate for POTUS. According to a recent poll, 10% of Bernie Sanders' primary backers support Johnson, and 13% of non-Trump Republicans.[10] He would be on 20% if the game wasn't "rigged" against him; at least, that's what he told the Wall Street Journal.[11] He was infamously booed at a Libertarian presidential debate for saying that he supported driver's licenses and didn't want to repeal the 1964 Civil Rights Act.[12]

Johnson is probably the first and only presidential candidate to have climbed all of the Seven Summits.

In an interview with Reason regarding his 2016 run for the presidency, Johnson stated that he was for a ban on burqas, because how dare people be allowed to wear what they want.[14] However, he quickly changed course once he realized that it'd harm his chances of getting a nomination telling people what they can and can't wear is not exactly libertarian.[15] Johnson also opposed Medicaid and Obamacare and even social security.[16] In fact, he thinks of the entire concept of medical insurance for non-emergency conditions as false and wants people to pay for every medical procedure out of pocket.[17]

However, he is very economically libertarian and has a tax plan which makes Donald Trump look left-wing. He wants to eliminate the income, capital gains, payroll, and estate taxes completely and replace them all with a flat 23% 28% national sales tax (much like Mike Huckabee's "fair tax" plan), it is even called "FairTax".[16][18] He is opposed to the government borrowing any money, ever! Even in times of war. He also opposed trade unionism, the regulation of big banks, supports the Trans-Pacific Partnership (very libertarian!) and is opposed to any control or management of trade from the government (oh, except for TPP).[16] Similar to Trump's promises to abolish the Department of Education,[19] Gary Johnson believes that "education is best provided by the free market".[16]

His stance on climate change is rather mixed. In 2011, he said that spending money to try to address global warming was pointless since the sun will envelop the Earth in billions of years, which is ridiculous given the differences in time scale.[20] He later claimed the statement was a joke, but he affirmed his belief that the government can't do anything about climate change and the only solution is to move to another planet.[21] However, unusually for a libertarian, he supports the EPA and has even expressed support for some kind of carbon tax with the caveat of repealing all current regulations on greenhouse gas emissions.[22]

Handing the election to an orange[edit]

If all you want is to tear down the system at any cost, then Trump was indisputably the "Libertarian" pick (this was applicable to Trump-Sanders crossover as well). It's obvious that Johnson was little more than a socially-embarrassed Republican who was rejected by his own party and so decided to play big fish in a small pond:

Ron Paul stated that he won't be voting for the Libertarian nominee.[23] Then you have your Lew Rockwell types who adore Trump, if only because he trashes the media, neocons, and progressives.[24]

In the 2016 Presidential election, Hillary Clinton won more votes than Donald Trump, but unfortunately, this does not count for anything in the US. Instead, the system gives more weight to people living in smaller (and generally more rural) states than to the more populated (and generally more urban) ones. At any rate, the difference between Trump and Clinton in states like Florida was smaller than the number of votes for Johnson. And his Vice Presidential nominee had even said that Clinton would be preferable over Trump when pressed in a TV interview.