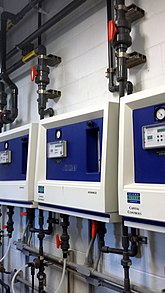 Water chlorination is one of several, and the oldest, method of sterilizing water. Commercially viable methods of disinfecting water include chlorination (Cl2), chloramination (NH2Cl), and ozonation (O3). Other less cost-effective methods of disinfection are ultraviolet light and reverse osmosis filtration. Prior to disinfection, naturally-sourced groundwater typically contains a microbiome that can contain harmful bacteria. After treatment, if insufficient disinfecting chemicals are not carried through the water system to consumers, harmful microbes can reenter the water.

The earliest methods of drinking water treatment date back to 4000 BCE, using filtration, boiling and sunlight. These methods primarily focused on aesthetics: taste and clarity. In 1855, John Snow proved that cholera was a waterborne disease, linking it to sewage contamination of water supplies. Reducing turbidity (i.e., dissolved solids) of drinking water by filtration reduced bacterial contamination somewhat, but it was chemical disinfection that was most effective. Water chlorination began in the United States in the mid- to late-19th century but did not become widespread until the early 20th century. In 1914, the U.S. Public Health Service set drinking water standards for bacterial content.[1]

A study showing the effects of increasing doses of chlorine in humans showed no adverse effects at any of the doses studied.[2] Drinking water chlorination is rather safe, even in cases of relatively heavy water chlorination. Water that has not been sanitized is much more dangerous than chlorinated water.[3]

Typhoid, cholera, and dysentery can be carried through water systems unless the water is disinfected. The widespread disinfection of water is one of the the greatest life-saving achievements in history.[1]

The methods of water disinfection that use chlorinated chemicals create low concentrations of carcinogenic chemicals from the reaction of chlorine with humic acids.[4][5][6] Recently water treatment facilities have been phasing out chlorination in favor of other disinfection methods, at least in part to reduce the potential carcinogenicity of treated water. Unfortunately, most alternatives are more expensive.[7]