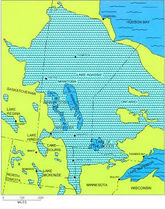 Diagram of the lake.

Lake Agassiz was a pre-historic freshwater lake located south of Hudson Bay in North America. The lake covered an area ranging from the region located about halfway between Lake Winnipeg and Reindeer Lake in present day Manitoba and Saskatchewan in the north, to the vicinity of Watertown, South Dakota in the south. It also had at least three large adjacent lakes, one of which extended as far south as present day Spirit Lake, Iowa. The surface area of Lake Agassiz is estimated to have been about double that of the combined surface area of all five Great Lakes (244,106 km²).

In 1823, American geologist William Keating postulated that such a massive lake might have existed in that area. In 1879, the lake was named for Louis Agassiz, the Swiss paleontologist and geologist who originated the theory of the Ice Age.[1]

Significance of the lake[edit]

Lake Agassiz formed near the end of the last glacial maximum (around 15-20,000 years ago) as the glaciers covering much of North America retreated and meltwater pooled. A more recent theory states that episodes of sudden drainage of the lake — such as when its northern boundary breached, draining the lake into Hudson Bay — caused sudden cooling when the fresh water from the lake disrupted the thermohaline circulation.[2] As a result, the Northern Atlantic region would have grown colder while the equatorial regions would have grown warmer.

Louis Agassiz also theorized that the sudden influx of the lake's waters into the Atlantic Ocean might have raised sea level by about one meter. This would have suddenly and violently flooded most coastal areas. In turn, this would have led to the many great flood myths that originated in the more temperate regions of the world.