Hansen in 1988 being right about global warming and getting no credit for it from deniers.

James E. "Jim" Hansen is an alarmist, warmist shill for the global warming hoax and bankrolled by none other than the nefarious George Soros.[1]

...which is the case if you live in the alternate universe of global warming deniers. In reality, Hansen is an atmospheric physicist, former head of NASA's Goddard Institute for Space Studies (GISS) and an adjunct professor at Columbia University in New York City. He wrote a book on global warming in 2009 called Storms of my Grandchildren.

Hansen spent his early career researching the atmosphere of Venus. This work on Venus inspired him to look at the effects of greenhouse gases on Earth's atmosphere. He coined the term "Venus syndrome" in reference to the runaway global warming on Venus that caused its oceans to evaporate.[2] On Earth, this remains a logical possibility, but still a speculative and very worst-case scenario.[3] It could happen, but only if we burned about ten times the total fossil fuel deposits on Earth in a very short amount of time.[4] The fact that Hansen was wrong on this one entirely theoretical question hasn't prevented bullshit artists from trying to use it to discredit his entire body of work, however.

Hansen's work during the 1980s demonstrated that global temperatures were rising. His work consisted mainly of reconstructing temperatures from weather station data and building some of the earliest climate models. A 1988 paper of his which was a centerpiece of his testimony to Congress has become a bete noire among deniers.[5] He offered three different scenarios, of which "scenario B" fits the current rate of greenhouse gas emissions the best. While this scenario did overestimate temperatures to a certain degree, it actually provides the best fit for current temperatures and emissions.[6] Magnifying this discrepancy or outright falsifying Hansen's predictions has become a part-time job for many deniers, most notably Patrick Michaels in a 1998 Congressional testimony wherein he simply erased all but the least accurate of the scenarios.[7][8] A host of other deniers including the bullshitters at Climate Fraudit have quote mined or otherwise misrepresented this paper in order to claim that the models are "broken" or "incredibly alarmist."

Hansen has done prolific work in climatology and is also known for his work on black carbon.[9] Many of Hansen's predictions are less conservative than those of the IPCC (making him a nutty "alarmist" among deniers, of course), though some of his own earlier predictions have been on the conservative side, so take that for what it's worth.

Controversies (Some of them manufactured)[edit] 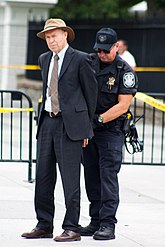 Hansen has become known for his activism on climate change in recent years and for not hiding his massive hate-on for deniers, which is why he has been promoted to the higher echelons of the Evil Liberal Science Conspiracy, probably second only to Michael Mann. In a 2008 statement, he commented that the CEOs bankrolling denialist think tanks should be put on trial for "high crimes against humanity and nature", which caused quite some butthurt.[10] He was also arrested at two protests against strip mining[11][12] and one against the TransCanada pipeline.[13]

As was the case with many other scientists in the Shrub administration, Hansen was censored at least once from appearing before the media and it was later found that NASA's findings had been downplayed for political purposes. The public relations arm of NASA had prevented him from making public appearances to talk about his work. A 2008 investigation by NASA concluded:

In 2011, Christopher Horner, a hack at the Competitive Enterprise Institute and author of The Politically Incorrect GuideTM to Global Warming and Environmentalism, spammed Hansen with Freedom of Information Act requests regarding payment for his lectures and scientific awards (apparently, some of those AAAS awards carry tidy sums in the hundreds of thousands of dollars, no kidding).[15][16] Ironically, deniers like Horner who constantly whine about "academic freedom" saw fit to urge Hansen to "release the data." Except it wasn't data about any substantive scientific issue, but about his scientific awards (and bogus connection to George Soros), which are already listed on his curriculum vitae anyway.[17]

The fictional Soros connection is based on the fact that he accepted pro bono legal advice from the Government Accountability Project,

. This was summarily inflated to Soros bankrolling Hansen to the tune of nearly $1 million — definitive proof that global warming is a hoax![18]

Hansen is also friends with eminent physicist (and unfortunate climate crank) Freeman Dyson, though they do throw insults at each other when it comes to global warming.[19]

An op-ed by Hansen published on May 9, 2012[20] sparked a minor controversy among some meteorologists and climatologists. Hansen claimed that a semi-permanent drought would develop in the Western and mid-Western United States, leading to Dust Bowl-type conditions, among other things. This prompted a response from Martin Hoerling disputing his claims. A second response by climatologist Kerry Emanuel challenged the claims of both Hansen and Hoerling.[21] Hoerling expanded on his original arguments, while Dan Miller, a venture capitalist and engineer, defended Hansen.[22]