The Andromeda Galaxy (also known by its catalog designations as Messier 31/M 31 or NGC 224[1]) is a famous spiral galaxy located in the direction of the constellation of Andromeda. It's the closest spiral galaxy to the Milky Way and the largest and most luminous member of the Local Group, an aggrupation of a few (mostly small) galaxies that includes ours.

(with binoculars can be spotted even from heavily light-polluted skies) as a small and elongated patch of light in the autumn (spring in the Southern Hemisphere) constellation of Andromeda, but just its central regions of higher surface brightness. A pair of binoculars or a telescope — the larger the better — on dark skies will be able to see more of it in both extension and details including dark dust lanes, a large star-forming region known as NGC 206

, and some of its satellite galaxies. Note that it's much better seen from northern latitudes as it appears in the zenith

or pretty close to it.

The first known reference to the Andromeda Galaxy dates from 964 CE, when the Persian astronomer Abd al-Rahman al-Sufi described it as a "nebulous smear" in the constellation of the same name[2], being labelled in medieval star maps as the "little cloud". And little more would be known of it for many centuries even after the invention of the telescope, being considered just another nebula of the many that dotted the skies[3] or even as a solar system in formation.

, that appeared on it in 1885, things changed in 1925 when Edwin Hubble[4] discovered Cepheid stars there, showing it was another ensemble of stars, gas, and dust similar to the Milky Way, but as a considerably smaller than the one presently accepted[5].

Decades of studies with improving methods and technologies have allowed us to know that the Andromeda Galaxy is around 2,540,000 light-years (780 kiloparsecs) away[6]. However even if it offers astronomers an opportunity to study all that stuff that we cannot see in our galaxy (in the optical at least) because of the always present interstellar dust, being seen almost edge-on means some of its properties such as structure or total luminosity are not well known. Nonetheless those estimations converge in that Andromeda is a big galaxy of SBb type in the Hubble classification

[7] more than twice as large as the Milky Way is usually assumed to be, with a diameter of more than 200,000 light-years[8], and with some estimations giving it one trillion (1012) stars[9]. Compared with our galaxy, it is twice as massive in both stellar mass (around 1011 solar masses[10] versus roughly 5x1010 solar masses for the Milky Way), and total mass including dark matter (1.5×1012 solar masses[11] against roughly 8×1011 solar masses for ours—note that those values are poorly known), but it is poorer in proportion than the Milky Way in interstellar gas and dust[12][13], having a current considerably lower rate of star formation. As described before, its total luminosity is not well determined but would probably be twice as luminous as the Milky Way (i.e., 40-60 billion times the Sun's luminosity), placing it among the largest and most luminous galaxies of our neighborhood in the Universe[14]

Like the Milky Way, the Andromeda Galaxy consists of a central bulge, a disk, and a galactic halo. However its central bulge is considerably more luminous, dense, and massive than the Milky Way's one[15][16] and contains a far more massive central black hole, with an estimated mass of (1-2)×108 solar masses[17]. The surrounding disk, as has been explained above, is twice as large as our galaxy's and contains the spiral arm structure as well as — like the Milky Way — a central bar, only recently detected because of Andromeda's inclination and being almost pointed toward us[18]. However those arms are somewhat messed up because of gravitational interactions with close companion galaxies[19], adding this to the difficulty of its study because of Andromeda's large inclination, and to top it off most of the gas, dust, and star formation are piled up in a ring with a radius of 32,000 light-years[20].

— almost three times more than the Milky Way[21], as well as some clusters not found in our galaxy that look like more extended and more diffuse versions of globular clusters[22]. However while the stars in the Milky Way's halo are more or less as old as the galaxy itself, those in Andromeda's one have a considerable dispersion of ages: from some that formed at the same time as it, to considerably younger ones with an age of just a couple hundred million years[23]. Finally, besides that whole lot of dark matter, as per our galaxy there's a large corona of hot gas surrounding it[24]. 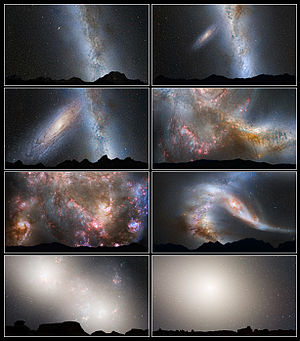 While Andromeda is thought to have been formed in the same way as the Milky Way (no pun intended), from matter overdensities left by cosmic inflation after the Big Bang that would coalesce "bottom-up", forming large systems from smaller ones and so on, some of its properties such as its large bulge and massive central black hole, the very varied ages of the stars on its halo a and its large number of globular clusters, the aforementioned rings of gas and dust, and some stellar streams on its halo suggest a more lively past than the one experienced by our galaxy. It's currently thought that, as expected for many other galaxies, the Andromeda Galaxy's past history has been one of mergers and interactions with its companion galaxies, the most important one having taken place eight to ten billion years ago between either two galaxies of similar masses and sizes (ie: two Milky Way-sized systems)[25] or a big one plus another half as massive as ours whose principal remnant is theorized to be the satellite galaxy M 32 (see further down) two billion years ago[26].

As per the Milky Way, Andromeda's future is expected to continue being one of interactions and mergers with its satellite galaxies while using up its remaining gas to form new stars[27] before finally after some close passages colliding

with our galaxy a few billion years from now, to form a considerably larger and more luminous galaxy. 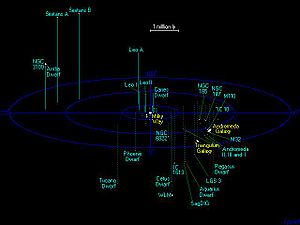 Map of the Local Group, showing the Milky Way and Andromeda in relation to nearby galaxies

Like the Milky Way, Andromeda is attended by a retinue of smaller satelite galaxies, most of them being small, very low surface brightness

systems that are hard to detect. By far the largest and most luminous one is the Triangulum Galaxy

, a mid-sized spiral galaxy but less than half as large as the Milky Way and a considerably less luminous system than either Andromeda or the Milky Way. Of special interest too are the two elliptical galaxies, M 32

, that appear in many pictures of Andromeda[28] being very close and interacting with it, with M 32 being a compact, high-surface brightness galaxy thought to be what remains of a considerably larger one that was stripped of most of its stars by Andromeda (and in turn collided and passed through Andromeda's center forming those two rings) and M 110, a small elliptical galaxy with some star formation within its center.

Andromeda also, as has been mentioned above, is the largest and brightest member of the small group of galaxies known as Local Group, which includes our galaxy too.

Of course poor Andromeda has been the victim of woo, with some cranks such as David Icke ('nuff said) linking it with alien races such as the Greys, who are stated to have bases here, collaborating with gummints... you get the picture[29]. Other examples include claiming it to be the source of Beings of light as well as Jim Humble, who claims to be a billion-year old God from that galaxy. Others appear in Youtube[30], showing how this mostly harmless world seems to be a magnet for all the freaks of the Local Group.