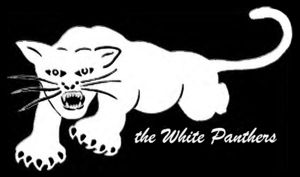 Their logo, a mirrored and color-inverted version of the Black Panther Party's logo

The White Panther Party, despite what the name suggested, were not racists coalition designed to oppose the Black Panther Party. Rather, they hated racists, and were allies of the Black Panthers. A far-left group, the Panthers were founded when someone asked Huey P. Newton what white people could do to help black people, and he responded that they could form the White Panther Party. The group was founded in 1968 by Pun Plamondon, Leni Sinclair, and John Sinclair. To assure people that they were not a white supremacist organization, John Sinclair would respond "quite the contrary" to any such claim.

Rather quickly some people did just that, and later released the following as the White Panther Statement[1]:

White Panther Party members in Michigan were instrumental in reviving the Fifth Estate during the late 1960s, a radical New Left and counterculture underground newspaper which later since the mid 1970s became an explicitly anarchist and often Neo-Luddite publication.

Their most notable member was John Sinclair, poet and manager of the rock band MC5, whose long prison sentence on an extremely minor marijuana possession charge led to a brief Free John Sinclair movement.[2] The Free John Sinclair movement was a significant if barely remembered part of the late-60s, early-70s era of protest. Among other things, there was the incident at the 1969 Woodstock festival where Abbie Hoffman, according to some claims, mounted the stage during the Who's set to grab the microphone and say "I think this is a pile of shit while John Sinclair rots in prison", with Pete Townshend then kicking Hoffman off the stage. John Lennon did a whole song about the John Sinclair plight, which appeared on the Some Time In New York City album. In response to Sinclair's imprisonment, a massive concert and protest was held at the University of Michigan in Ann Arbor, Michigan on December 10, 1971. It was called the John Sinclair Freedom Rally and it consisted of some well-known musical performers such as Lennon, Yoko Ono, Bob Seger, and Stevie Wonder, as well as guest speakers such as Allen Ginsberg, Jerry Rubin, and Bobby Seale. Three days after the festival, the Michigan Supreme Court struck down the state's marijuana laws as unconstitutional, and Sinclair was released.

Another charge against three activists including John Sinclair and White Panther Party co-founder Lawrence Plamondon in 1972 for conspiracy to destroy government property led to the landmark United States v. U.S. District Court decision, where the U.S. Supreme Court in a unanimous 8-0 decision declared warrantless wiretapping a violation of the Fourth Amendment.

Besides Ann Arbor and Detroit, the White Panther Party was active in the San Francisco Bay area and had chapters in San Francisco and Berkeley. In 1980, the White Panther Party organized a recall election against Berkeley-Albany Municipal Court Judge Mario Barsotti, after Barsotti had signed a 1979 eviction order against the WPP's communal house in Berkeley. In 1984, the White Panther Party organized a recall attempt against then-mayor of San Francisco, Dianne Feinstein, after she proposed a law banning handguns in the city. Both of these recall elections made the ballot and caused a minor ruckus; both illustrate the vast divide between "respectable" liberals, and radicals of the left. The Barsotti recall attempt was condemned outright by most of the Bay Area's establishment liberals, with a few such as Congressman Ron Dellums taking a neutral stance of neither supporting nor opposing, and a few saying although they supported the recall of the particular judge in question they were opposed to recall elections in general on principle, and so would not support it. The recall was supported by the more radical elements in the Berkeley left, with the White Panthers and other Bay Area radicals launching invective against Dellums and the other establishment liberals as traitors to the cause. Regarding the gun control issue, the difference between liberals who have made gun control laws a core part of their agenda, and leftists who endorse the ideas of armed self-defense against police brutality and often revolution, should be obvious.

This racism-related article is a stub.
You can help RationalWiki by expanding it.
Retrieved from "https://rationalwiki.org/w/index.php?title=White_Panther_Party&oldid=2450394"
Categories:
Hidden category: