The Yippie flag. Apparently they were fond of mint.

Were you looking for yuppie?

The Yippies, or Youth International Party, were a political movement in the late 1960s in the United States. They were originally formed by Abbie Hoffman (1936-1989) and Jerry Rubin (1938-1994) as an attempt to use comedy and absurdity to force people to re-examine their basic assumptions about the way the United States works. For instance, they once nominated a pig to run for President, plastered the outside of an Army recruitment booth with several hundred bumper stickers reading "See Canada Now", and provoked a small riot by throwing dollar bills onto the floor of the New York Stock Exchange. The basic idea was to merge the imagery and style of the hippie counterculture with the politics of the emerging New Left. 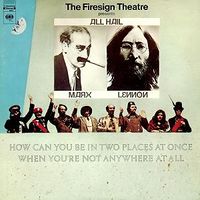 Many other groups of the time did not take them seriously. "Real" leftists focused on serious matters, like unions or denouncing US imperialism. The Yippies instead made sure to have a lot of fun. They were sometimes referred to as "Groucho Marxists". Somehow, this was supposed to be derogatory.

The rock&roll group The Fugs was a favorite among Yippies for their satirical political lyrics and general outrageousness. They gained notoriety when they faced obscenity charges for exposing and rubbing their privates onstage.

Abbie Hoffman was particularly noted for his controversial statements and dress, especially a shirt he had made from the American flag, a distinct violation of the US flag code that got him beaten up by police. (Somehow, today, all sorts of "patriotic" people now do the same thing and are loved for it.) He also wrote a book titled Steal This Book that advocated committing minor, non-violent fraud to get free stuff from corporations and the government. Many people took the book's title literally.[2] On the success of the book, he was quoted as saying, "It's embarrassing when you try to overthrow the government and you wind up on the Best Seller's List."

The Yippies also played a respectable part in geek culture. The organization's house organ, the Youth International Party Line, founded by Hoffman and a man known as "Al Bell," taught readers how to cheat the phone system, ostensibly to avoid federal excise taxes paying for the war in Vietnam. The cheap coin slugs used by Hoffman gave way to complicated technical gadgets such as "blue boxes," capable of seizing unused long-distance trunk lines. Later computerization of the phone systems would tie users of these devices, known as "phreaks", with the nascent college computer lab/bulletin board system subculture, leading to the first hackers. Much of the humor enjoyed by computer geeks has its origin in the Yippies' irreverent style.

In the post-Yippie part of his life, Jerry Rubin became a multi-millionaire capitalist from his early investment in Apple Computers; he also was involved in multilevel marketing. He died in 1994 after being hit by a car while jaywalking. Tom Hayden, one of his co-defendants from the Chicago Seven conspiracy trial, said at his funeral, "Up to the end, he was defying authority."[3]

Yippie.com was for a time a computer repair company. Oh well.