An example of a well-regulated firearm.

In legal terms, gun control refers to limiting access, "carrying rights", or use of firearms by the general public. Access limitations consist of completely banning the sale or possession of some types of firearms (such as sawn-off shotguns, bazookas, nuclear bazookas

, machine guns mounted on the back of your truck

on the foredeck of your yacht), and also regulating who is permitted to obtain firearms in general — for instance, preventing convicted felons from owning firearms, but oddly enough, not suspected terrorists.[2] It's easier to get on the "no fly list

" than to be banned from owning a gun.

"Carrying rights", when regulated, limit how and where firearms may be carried on a person (or even in a vehicle) — whether in full view or "concealed." In some jurisdictions, there may be restrictions requiring that firearms carried in vehicles not be in the passenger compartment.

Regulating the use of firearms often consists of preventing their discharge in densely populated regions, such as in cities and towns.

Gun control has become a highly politicized issue in the United States, for many cultural and historical reasons that no one completely understands. It is often a moot topic in other civilized countries.[note 1]

The first attempts at federal gun control legislation in the U.S. occurred during the 1930s. At that time, unscrupulous weapons salesmen sold military-grade machine guns manufactured for use in World War I (especially the Thompson Submachine Gun)[note 2] to criminals. As a result, gangsters and bank robbers were often better armed than many police forces (who may have only had side arms, or a rifle or shotgun at best) and could pretty much rob banks with impunity. Tommy Guns were also marketed to police[4] during the 1920s.

Indeed, any major shooting in the US is usually followed by a round of both gun control advocates and gun nuts arguing that said incident would not have happened if there had been strict gun control laws, or if everyone packed heat Wild West-style, respectively. A 2004 meta-analysis on gun control research by the National Research Council (NRC) found efficacy for certain types of police intervention in reducing gun crime, but also found that the literature was mixed and ambiguous on whether right-to-carry (RTC) laws increased or decreased crime either way,[5] though a 2019 meta-analysis found that RTC laws increased violent crime by 13–15% after 10 years of adoption.[6] In addition, gun nuts will inevitably cite the "research" of serial cherry-picker, data fabricator and sock puppeteer John Lott.[note 3][7] Some may also use the equally fraudulent arguments of Lott's source, the criminologist Gary Kleck.[8][9]

A 2014 Stanford University study reviewed and expanded on the NRC study with additional data. Though sympathetic to the NRC's view that it was difficult to determine whether right-to-carry laws increased or decreased crime, it nevertheless criticized their statistical methodology for not using cluster adjustments. The Stanford study found that RTC laws may have increased aggravated assault by 33% (p<.1), and also increased rape and robbery between 1970 and 2010 (p<.1), and murder between 1999 and 2010 (p<0.05).[10] A five-year study of violent crime in the U.S. found that of all non-fatal crime victims, 99.2% failed to defend or to threaten the criminal with a gun.[11] In 2012 alone, 190,342 firearms were reported lost or stolen in the US, with Texas leading at 10% of all incidents.[12] More guns do not mean more safety, but more guns for criminals.[13]

Because both the proposing of new gun control laws and opposition to gun control laws can garner votes for politicians, gun laws in the U.S. have become a morass of often contradictory rules, with either gaping loopholes or severe penalties for a misstep. The 1994 Federal Assault Weapons Ban,[14] for example, invented an entirely new legal category of firearms — "assault weapons" — identified not by their lethality, but by a list of scary-looking cosmetic features.[note 4] Suppressors are even more strictly controlled than the guns they can be attached to. Guns that have had their firing mechanism removed are legal, but "imitation guns" are completely forbidden. Firearms dealers must obtain licenses, and all sales through such dealers are subject to a criminal background check. Private person-to-person transactions are exempt from the federal background check requirement, but some states require background checks for all sales, including private sales. Online sales by private individuals are also allowed, but the seller must send the gun to a licensed dealer, who will complete the transfer to the buyer (including doing the required background check). If the buyer and seller are both residents of the same state, they can complete the sale in person like any other private sale, but interstate sales must be completed via a licensed dealer with a background check, and are subject to a complex set of rules as to the states of residency for the seller and buyer. Individual states often supplement the federal laws with their own maze of legal do's and don'ts.

Studies on firearm and ammunition bans have been inconsistent; certain studies indicated decreases in violence associated with bans, while others indicated increases. One meta-analysis from 2015 argued that "It must be tentatively concluded that higher gun ownership rates do not cause higher crime rates, including homicide rates".[15] Another one from the same year however concluded that "the weaknesses in US federal firearm policies are well documented and result in many high-risk individuals having access to and using firearms to commit violent crimes",[16] and another one from 2017 claimed that "evidence from 130 studies in 10 countries suggests that in certain nations the simultaneous implementation of laws targeting multiple firearms restrictions is associated with reductions in firearm deaths. Laws restricting the purchase of (e.g., background checks) and access to (e.g., safer storage) firearms are also associated with lower rates of intimate partner homicides and firearm unintentional deaths in children, respectively".[17]

Several studies also found that the number of banned guns retrieved after a crime declined when bans were enacted, but these studies did not assess violent consequences. Studies of the 1976 Washington, D.C. handgun ban yielded inconsistent results. Bans often include "grandfather" provisions, allowing ownership of an item if it is acquired before the ban, complicating an assessment of causality. A 2003 study indicated that sales of firearms to be banned might increase in the period before implementation of the bans (e.g. the Federal Assault Weapons Ban).[18]

The research behind the "self-defense" aspect of owning a gun is not convincing. A 2015 study by David Hemenay of Harvard University researched National Crime Victimization Survey (NCVS) data on about 14,000 people, showing that legitimate self-defense cases occur statistically rarely, in less than 1% of the population surveyed.[19] Even officers from big cities, despite being exposed to far more criminals, report rarely having to use a gun; a Pew Research Center survey conducted by the National Police Research Platform reported that, out of 7,917 officers from 54 departments with 100 or more officers, only 27% have fired a weapon on duty.[20]

There is an association between U.S. states with less restrictive gun laws and higher homicide rates.[21] In 1996, Australia enacted strict gun laws and a nationwide buy-back program following a mass shooting;[22] since then, mass shootings in Australia have essentially ended.[21] This is further confirmed by a follow-up meta-analysis,[23] demonstrating an overall reduction in homicide and suicide rates.

There is a convincing link between gun availability and gun suicides.[21][19][23] A 2016 meta-analysis found that stronger gun laws did reduce homicide rates, and that the strongest evidence was for laws that required background checks and permits to purchase firearms.[24]

A 2013 study found a correlation (not causation) that suggested that white racists are more likely to own guns and to oppose gun control laws, which is not to suggest that white gun owners tend to be more racist,[25] and might not apply to Haiti. The FBI also identified a dangerous spike in "Active Shooter Events" — even as overall gun violence has managed to level off during the same time period.[26]

Unsurprisingly, the National Rifle Association does not like research findings.[21][19] They called it "junk science" and encouraged readers of American Rifleman

to protest against the CDC for funding such research. They have effectively lobbied against funding of aspects of the CDC since the mid-1990s. For instance, in 1996, Congress cut $2.6 million of the CDC's budget, the exact amount that had been allocated for firearm research the previous year. In 2019, however, legislation introduced a spending bill that included $25 million for research of firearm violence,[27] thus overturning the ban on research that was effective since 1996.

See the main article on this topic: 3D printing 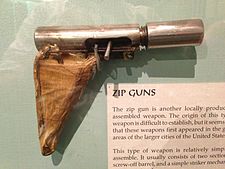 The spread of consumer-level additive manufacturing (a.k.a. "3D printing") since about 2010 has fed into gun control debates. As soon as knowledge of the technology became known, people pondered its use in gun-making, and one or two groups made guns this way — for "research purposes", of course. Early models were fragile and primitive; even the creators did not bill them as effective firearms.[28] A great deal of press coverage ensued, ranging in tone from blasé to terrified, a result of a combination of desperation for headlines, devoting excessive attention to "new" technology that doesn't come close to the hype, and ignorance of how easy it already is to make any given item (zip guns

for instance) the "old-fashioned" way.

In fact, some of the first examples of "3D-printed" guns were actually just 3D-printed lower receivers (the part of a rifle legally regarded as the "gun", since it bears the weapon's serial number) which were then completed with off-the-shelf parts. It's essentially the same thing as 3D printing an engine block intake manifold then saying you've built an entire car.

Designers and makers of 3D-printed guns have released a variety of new designs since the appearance of the first one (described above), expanding greatly on the functionality of the original, and 3D-printed guns represented, for a period of a few months, a political football unto themselves. In 2018, the US Justice Department ruled that 3D-printed gun blueprints (as part of unregistered weapons) are legal per the Second Amendment.[29]

Gun control has another meaning in enthusiast and hunting terms. It refers to making sure you hit only your intended target when discharging a firearm and preventing unintended discharges. Some people seem incapable of this, but "oops, sorry, I thought you were a quail" seems to get most of them off the hook.[note 5] Some people are just not good enough and disciplined enough to use guns,[34] while others clearly are.[35]