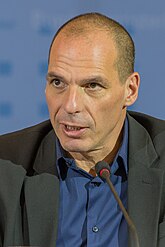 Am I too sexy for you?

Yanis Varoufakis is a former Greek finance minister who oversaw the high-stakes negotiations with Germany during the sovereign debt crisis.

Varoufakis was nominated as the finance minister by Tsipras. The five-month battle was fought in the tabloids as well as the boardroom. Yanis was picked for his ability to charm people, to the extent that a Portuguese MP wrote, “Damn, the Greek finance minister is sexy”.[2] Der Spiegel, meanwhile, read like the introduction to the German version of Fifty Shades of Grey: Naturally Schäuble is the big spoon cool, collected, a modest leader, a good teacher. Varoufakis is hysterical, egocentric, uncivilised, a naughty undergrad. (Does it go into detail about his massive reform package too?)[3]

He resigned to assist negotiations of Greece with EU.[4] He then created the DiEM25 (Democracy in Europe Movement 2025).[5] DiEM25 is a movement that aims to democratize the European Union, to make states, cities, regions and even the workplace more democratic.[6]

The Syriza party, of which he was a member, wanted to raise the minimum wage and nationalize hospitals.

Varoufakis called himself an "erratic marxist".[7] He is in favor of a basic income, which he calls an Universal Basic Dividend, funded not via personal taxation but by the state taking a share of all equity issues (and hence owning a part of every business).[8][9] He is also opposed to austerity.[10]

He believes that the European Union isn't really democratic and its policy is influenced by lobbyists, technocrats, bankers... He wants to democratize it. He also thinks capitalism is bad for democracy.[11]

This economics-related article is a stub.
You can help RationalWiki by expanding it.
Retrieved from "https://rationalwiki.org/w/index.php?title=Yanis_Varoufakis&oldid=2412905"
Categories:
Hidden category: