From RationalWiki
(Redirected from Zygote)
Jump to navigation Jump to search 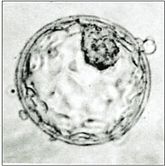 A morula (from Latin for "mulberry") is a solid ball of 16 compacted cells, most on the outside, but with a few on the interior. At this point, the cells, previously totipotent, begin to differentiate: the cells on the outer surface will become the placenta, while those on the inside will become the inner cell mass that will become the baby (unless something happens).

See the main article on this topic: Miscarriage

It's tough being an embryo. Studies done on early stage pregnancies suggest that over 25% of all pregnancies will not survive to the fetal stage.[2] Further studies, based by and large on interview and statistic, as well as lab studies and data from in-vitro fertilization suggest that nearly 80% of all fertilized zygotes will not implant. [3][note 1] This should indicate to deeply religious anti-abortion folks that God is the most prolific abortion provider ever by a ridiculous margin, but they don't; instead, they say that these early abortions are all just part of His plan. Or something. Either that, or God's design of the human body is extremely fallible and inefficient. But, really, it's because of the challenges of the perpetuation of any species in the first place.

According to recent studies,[citation needed] 65% of abortions in the US and Western Europe occur during the embryonic stage [note 2]. This is in stark contrast to the typical anti-abortion propaganda that almost always depict abortions gruesomely destroying a well-developed fetus (third trimester abortions are rare). After all, if the fetus didn't look like a baby, it would be harder to make pathetic pathological appeals about murdering babies. The statistic is usually what pro-abortion arguments source when they disparagingly refer to fetuses as clumps of cells.