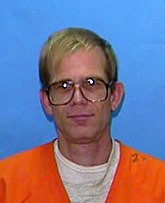 Paul Jennings Hill (1954-2003) was a Presbyterian minister, anti-abortion terrorist, and all-around kook who became the first person executed in the U.S. for murdering an abortion doctor.

Hill grew up in a Presbyterian family. During his teen years in the 1960s, he acted the part of a doped-up hippie, regularly using marijuana and LSD. In 1973, after a bad trip and an encounter with a muddy swimming pool, he switched his allegiance from dope to Jesus, becoming such a gnat-straining legalist as to maintain that speeding was outright apostasy.

Five years later, he married a public accountant, who supported him while he studied at the Reformed Theological Seminary, a conservative Calvinist outfit. Graduating in 1984, he was ordained into the Presbyterian Church in America; but fairly quickly finding that church too liberal for his tastes, he switched to the Orthodox Presbyterian Church, a body founded by fundamentalist parties to the Fundamentalist-Modernist controversy of the 1920s. But even the OPC was not staunch enough for him, and in 1990 he gave up his career as a minister, switching to an independent Calvinist church in Valparaiso, Florida.

He was not able to support his family through his ministry following his departure from the OPC, so he also operated as an independent auto detailer in nearby Pensacola, the home of Kent Hovind and Pensacola Christian College.

In 1993, after the fatal shooting of abortion doctor David Gunn, Hill appointed himself spokesman for all anti-abortion terrorists, appearing on national television to express his view that the murder of abortion doctors was justified on the grounds of defending fetuses.

After some debate within Hill's church as to whether Hill was justified in these statements, Hill was excommunicated. He proceeded to set up a house church in which he served as minister to his own family.

He became a publicity hound, actively seeking the nationwide attention he had received after declaring himself chief terrorist spokesman; according to the pastor at his church, at this time he suffered from delusions of grandeur, thinking himself to be an historic figure on the scale of Martin Luther. He also engaged in disorderly conduct such as screaming, "Mommy, don't kill me!" over the wall of the Ladies Center abortion clinic in Pensacola. These antics caused many in the anti-abortion movement, in Poe's Law mode, to believe that he was a pro-choice or police plant running a false flag operation.

On July 29, 1994, Hill took a shotgun to the Ladies Center and set it off at close range. Abortion doctor John Britton and his bodyguard, James Barrett, were both killed, and Barrett's wife was injured. Hill then set down his gun and walked toward a police officer, who promptly arrested him.

Hill went through several trials, ultimately being found guilty of murder and sentenced to death. The judges in his trials ruled that he could not use the "affirmative defense" that he had acted in the defense of fetuses to be aborted; consequently, he mounted no defense at all.

Throughout the trials and in his time on death row, Hill was entirely unapologetic for his actions. Prior to being sentenced to death, he made a speech before the court in which he said, "You may mix my blood with the blood of the unborn and those who have fought to defend the oppressed. However, truth and righteousness will prevail."

Hill had been in correspondence with the Dominionist kook, Gary North of the Institute for Christian Economics. After Hill's arrest, North published a series of letters from himself to Hill, in which he really let the murderer have it. North's points, which offer some insight into Dominionist thinking, were these:

Hill was executed on September 3, 2003 at Florida State Prison, and nothing of value was lost.