From RationalWiki
(Redirected from A fossil whale was found vertically through several strata)
Jump to: navigation, search

Polystrate fossils are fossils that cut through fossil layers. Creationists like to use the fossils to "prove" evolution could not have happened. Their arguments are discussed below.

"How can you explain the trees then, if God doesn't exist?"[edit]

This has been explained for 145 years. In Acadian Geology, J.W. Dawson wrote:[1]

It is evident that when we find a bed of clay now hardened into stone, and containing the roots and rootlets of these plants in their natural position, we can infer, 1st, that such beds must once have been in a very soft condition; 2dly, that the roots found in them were not drifted, but grew in their present positions; in short, that these ancient roots are in similar circumstances with those of the recent trees that underlie the Amherst marshes. In corroboration of this, we shall find, in farther examination of this [stratigraphic] section, that while some of these fossil soils support coals, other support erect trunks of trees connected with their roots and still in their natural position.

Basically, this means that all these trees have roots in clay, which is not possible if they were torn up by Noah's flood. The clay was once river sediment. Either the trees were immersed in water and slowly covered with river sediment, or the trees were buried in a quick river flood. Coal is always above the trees, formed by the plant life growing with the trees.[2]

"The trees were buried by Noah's flood!"[edit]

Not true. Some trees can survive being partially buried and some polystrate trees show roots attempting to grow facing the surface. If the trees were buried all at once, the fossils wouldn't show root growth.

"Some of the trees are slanted or upside down!"[edit]

Yeah, it's not like, you know, rocks move over time or something. Continental plates totally don't move. And it's not like if a tree happens to be in the rock, it would be angled the direction of the rock movement. 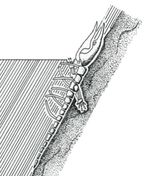 "The whale was found in a vertical position!"[edit]

Actually, it was found lying at an angle 50-40 degrees from horizontal.

The strata containing the whale consists of diatomites that accumulated within deep bays and basins that lay along the Pacific coastline during Miocene times. As a result of folding and tectonics associated with the formation of the Transverse Ranges, the strata containing the enclosed skeleton has been tilted into a less-than vertical position. These sediments lack any sedimentary structures that would indicate catastrophic deposition. Rather, the strata exhibit laminations indicative of slow accumulation on an anoxic bay bottom. Within the adjacent strata, several hardgrounds occurs. A hardground is a distinctive cemented layer of sedimentary rock that forms when the lack of sediments being deposited over a very long period of time on the sea bottom allows the surface sediments to become cemented (Isaac 1981, Garrison and Foellmi 1988). In fact, identical sediments are currently accumulating without the involvement of a Noachian-like flood within parts of the Gulf of California (Curray et al. 1992; Schrader et al. 1982).