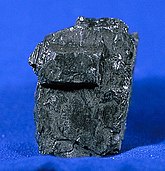 Coal is that sooty black stuff one usually associates with the late 1800s and Santa Claus. But coal, a fossil fuel, is the largest source of energy for the generation of electricity worldwide, as well as one of the largest worldwide anthropogenic sources of global warming. Gross carbon dioxide emissions worldwide from coal usage are slightly more than those from petroleum and about double the amount from natural gas.[1] Burning coal to produce electricity also releases the most carbon dioxide per kWh generated.[2] Fun stuff. Exposure to coal in various forms is carcinogenic to humans.[3]

See the main article on this topic: Clean coal

Clean coal is a buzzword oxymoron for coal power that is "clean" because they pump the emissions underground.

Coal mining is environmentally destructive and dangerous. Coal can cause "Black Lung," also known as coal worker' pneumoconiosis.[4] On multiple occasions, miners have been trapped in coal mines for extended periods of time. Coal mining is often associated with Kentucky, the Ruhr, Silesia and Wales.

an open pit lignite mine - lovely, isn't it?

Reducing the danger to the miners often means increasing the environmental damage; open-pit mining is not nearly as hazardous as the underground variety, and mountaintop removal also much safer, but it also means mucking up the local environment to a much greater degree.

Coal begins as layers of plant matter accumulate at the bottom of a body of water. For the process to continue, the plant matter must be protected from biodegradation and oxidization, usually by mud or acidic water; the wide shallow seas of the Carboniferous period provided such conditions. This trapped atmospheric carbon in the ground in immense peat bogs that were eventually covered over and deeply buried by sediments, under which they metamorphosed into coal. Over time, the chemical and physical properties of the plant remains (believed to mainly have been fern-like species antedating more modern plant and tree species) were changed by geological action to create a solid material.

Coal oil was once used as a panacea,[5] but has fallen into disuse. Coal tar, on the other hand, is an approved FDA ingredient for over-the-counter topical medicines. There is no evidence that coal tar causes cancer from short-term, low concentration topical use,[6] even though coal tar is carcinogenic in humans from high-dose occupational exposure.[7]