The Recent African Origin[1] (RAO) hypothesis is the dominant model of human evolution, arguing that anatomically modern humans (Homo sapiens) had an exclusive evolutionary origin in Africa within the last 200,000 years.[2] According to the model, Homo sapiens migrated across and out of Africa (<120,000 BP), replacing archaic humans (such as Neanderthals) across the Old World with negligible to no interbreeding.

Neanderthal-derived genes in living Eurasians are currently estimated to be 1.5 to 2.1%,[3] with additional Denisovan genes in parts of Asia, New Guineans and Australian aborigines. This small level of archaic admixture is compatible with the RAO: "a recent African origin (RAO) model for modern humans is still supported by the data"[4][5][6] (see Misconceptions below).

In 2015 researchers discovered that 7.4% of the genome of an early Upper Paleolithic modern human from Peştera cu Oase (Romania) was Neanderthal.[7] This higher level of genetic admixture has been explained by the extensive change in modern-human gene pools (through population-size changes and migrations) during the start of the Holocene, and by presuming that Neanderthal (and perhaps other archaic) contributions have been reduced.[8] Since archaic genetic contributions were formerly higher, some now argue that "Neandertal and Denisova genomic data are most commensurate with the Assimilation model"[9][10][11] (note though these higher admixture rates have been questioned as a possible overestimation[12] and one specimen whose genome was sequenced in 2014 - a femur from western Siberia, dated 45,000 BP, showed only a very small higher admixture percentage, 2.3%[13]).

Charles Darwin was the first to propose an evolutionary link between humans and Africa, after noting the shared behavioral and morphological similarities between humans and African apes.[14] However, due to the lack of available fossil evidence at the time, his speculations were ignored by the wider scientific community, and an "Out of Asia" theory remained prominent instead.[15] Darwin's hypothesis was finally supported in the 1920s with the discovery of ancient hominid fossils throughout the African continent. As the 20th century progressed, scientists increasingly began to favor Africa, rather than Asia, as the origin of humans due to the discovery of more fossils. The development of RAO also served to discredit polygenesism, which claimed that each human race has a different origin. Genetic evidence further strengthened this view with the discovery of the Mitochondrial Eve in the 1980s, with the scientific paper concluding that all current human mtDNA originated from a single ancient African population.

RAO's main opponent is the less widely accepted Multiregional hypothesis (first proposed in 1984), which argues that modern humans arose from archaic humans in multiple regions (though the hypothesis doesn't argue in favor of polygenism). However, by the late 1990s, the strong form of the multiregional hypothesis lost support due to perceived incompatibility with genetic and fossil evidence, and in 2003 was revised to give Africa a greater role in explaining the evolutionary origins of modern humans.[16]

The RAO model is usually misinterpreted as denying any hybridization between African moderns and non-African archaics took place. However the RAO hypothesis has never (since it was formulated, e.g. Cann et al. 1987) ruled out the possibility there was minimal interbreeding.[17][18][19][20][21] Archaic genetic input, though, is "considered essentially insigniﬁcant" (and therefore negligible), which distinguishes RAO from the Assimilation model (AM).[22] Brauer et al. (2004) criticize Multiregionalists for setting up a straw man argument that RAO strictly posits no interbreeding occurred, which is easy to refute (because the least possible amount of archaic admixture would then falsify the hypothesis):

Complete replacement does not feature in all versions of the Out of Africa hypothesis, and therefore we contend that it would not be falsiﬁed by demonstration of some modern-archaic human gene ﬂow outside of Africa. Both before and after the pioneering study by Cann et al. (1987), proponents of the Out of Africa hypothesis accepted the possibility of a certain amount of gene ﬂow between the migrating early anatomically modern humans and the non-African archaic groups (Brauer, 1984, 1992, 2001; Cann, 1992; Stringer, 1992, 2001; Stringer and Brauer, 1994).

Exactly who has ever claimed that absolutely no interbreeding occurred is unclear (not even Rebecca Cann in her influential mtDNA studies rejected slight Neanderthal admixture). Nevertheless, Stringer has called this extreme variant of RAO the "Eve Theory" or "Complete Replacement".[23] Brauer (1989, 1992, 2001) has named his own model Replacement with Hybridization, despite not distinguishing this from the standard RAO model: "Brauer also contends that such hybridization probably did not occur and that if it did its effects were negligible".[24] Aiello (1993) made the mistake of treating RAO and Brauer's model as distinct, writing that the latter "allows for a greater extent of hybridization", when contrarily "the fact Brauer views hybridization to be basically insignificant is reflected in his recent dismissal of any evidence of continuity in the early modern Europeans from Mladec",[25] and Brauer (2007) "does not see himself as promoting a model that is different from the African replacement [RAO] model".[26] 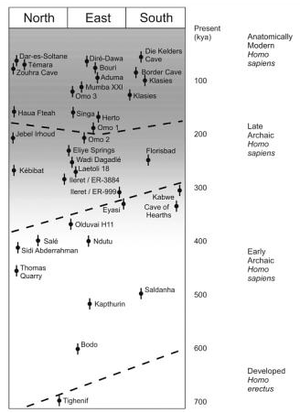 The RAO hypothesis is often thought as saying modern humans arose in Africa via speciation. While some RAO proponents might hold this position, a more popular view equates "anatomically modern humans" (AMH) with an evolutionary grade in H. sapiens, not a clade.[27][28] The diagram (Brauer, 2012) shows fossils from North, East and South Africa and the 3 intraspecific grades or morphs.

Another misconception is that RAO has to equate African anatomical modernity with a speciation event. Chris Stringer, a leading proponent of RAO notes that "whether we regard the morphological differences between the Neanderthals and modern humans as intraspecific or as specific, we are certainly not dealing with a bio-species concept with absolute fertility boundaries" and that RAO does not "necessarily entail accepting that dispersing modern humans must have represented a new species".[29] This is rather a broader problem in paleontology, since by the nature of fossil evidence, paleontologists are forced to deal with a morpho-species concept rather than a bio-species concept, i.e. paleontologists can never really know whether two similar looking fossils could have produced viable offspring when they were alive.[30]

RAO proponents reject the Multiregional claim there was morphological continuity between archaic humans and early moderns outside of Africa (the period before and after the replacement time). The persistence of Neanderthal skeletal traits in Upper Paleolithic European skulls would demonstrate a significant (non-negligible) degree of archaic genetic admixture (since phenotype is an expression of genes) and falsify the RAO hypothesis, but many studies detect none, e.g. a major study that included informative ancestral non-metrics in the Neanderthal skull found:

This denial of morphological continuity does not mean proponents of the Recent African Origin (RAO) hypothesis deny there was some minimal interbreeding between archaic and modern humans, but any genetic admixture is considered too trivial to show up in skeletal/anatomical features.

Morphological traits cited in Multiregionalism and Assimilation model literature as evidence for significant Neanderthal (or other archaic) continuity are instead claimed by RAO proponents to be homoplasies, acquired through convergent evolution: "these features could have continually re-evolved in the same region, producing homoplasy rather than phylogenetic continuity",[32] as cranial traits that are not region-specific/are poorly informative about ancestry (i.e. found at high frequency in multiple regions[33][34]), or as non-homologous features (problematic character states[35]).